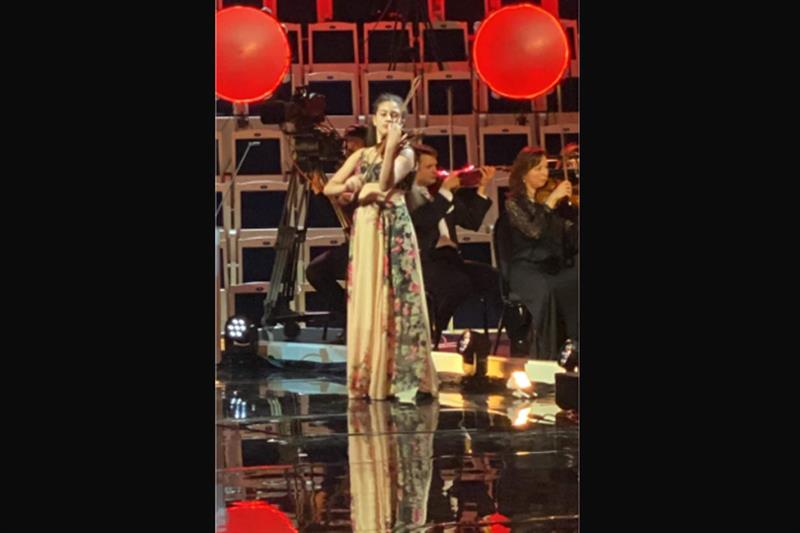 Abouzahra, representing Germany and Austria, took part in the third and final round of the Nutcracker, a renowned competition organized by the state cultural television channel “Russia-K”, the last edition of which took place in Moscow in the Tchaikovsky Hall.

Accompanying the young finalists, the Moscow Philharmonic Orchestra under the direction of Michael Shekhtman.

Abouzahra performed Carmen Fantasie for solo violin by Hungarian composer Jenő Hubay, based on the opera Carmen by Georges Bizet. Her performance was described as “emotionally rich and technically flawless” during the competition.

It should be added that in the first round of the competition, broadcast on November 29, Abouzahra presented the Dance of Aisha and the Dance of the Saber from the ballet Gayane by Aram Khachaturian (1903-1978). For the second round, she chose a difficult piece, Valse-Scherzo by Piotr Ilitch Tchaikovsky (1877-1893).

In the final, the jury awarded Sofia Demetriades the gold prize for her interpretation of the third movement of the Violin Concerto No. 3 by Camille Saint-Saëns.

Born to a Hungarian mother, Nóra Emödy, and an Egyptian father, Ahmed Abouzahra, both pianists, the young musician is also the granddaughter of the famous Egyptian actor Abdelrahman Abouzahra.

Mariam Abouzahra started playing the violin at the age of three, like her older sister Amira. Both sisters performed a lot and won international competitions, such as the German national youth competition, the Virtuózok Talent show in Hungary and many others.

Most recently, in 2020, the sisters received the highest awards from one of the most prestigious competitions for young violinists, the Arthur Grumiaux International Competition in Belgium.

The Abouzahra sisters are also among the rare young talents who are offered support by the Fondation Jeunes Virtuoses. Mariam Abouzahra is currently studying at the University of Music and Performing Arts in Vienna under the direction of violin teacher Dora Schwarzberg.

The Nutcracker International Television Competition for Young Musicians has been discovering and promoting young talent in Russia and around the world since 2000. This year, 16 participants were initially selected by the competition committee via video to compete on piano, strings, wind and percussion. .