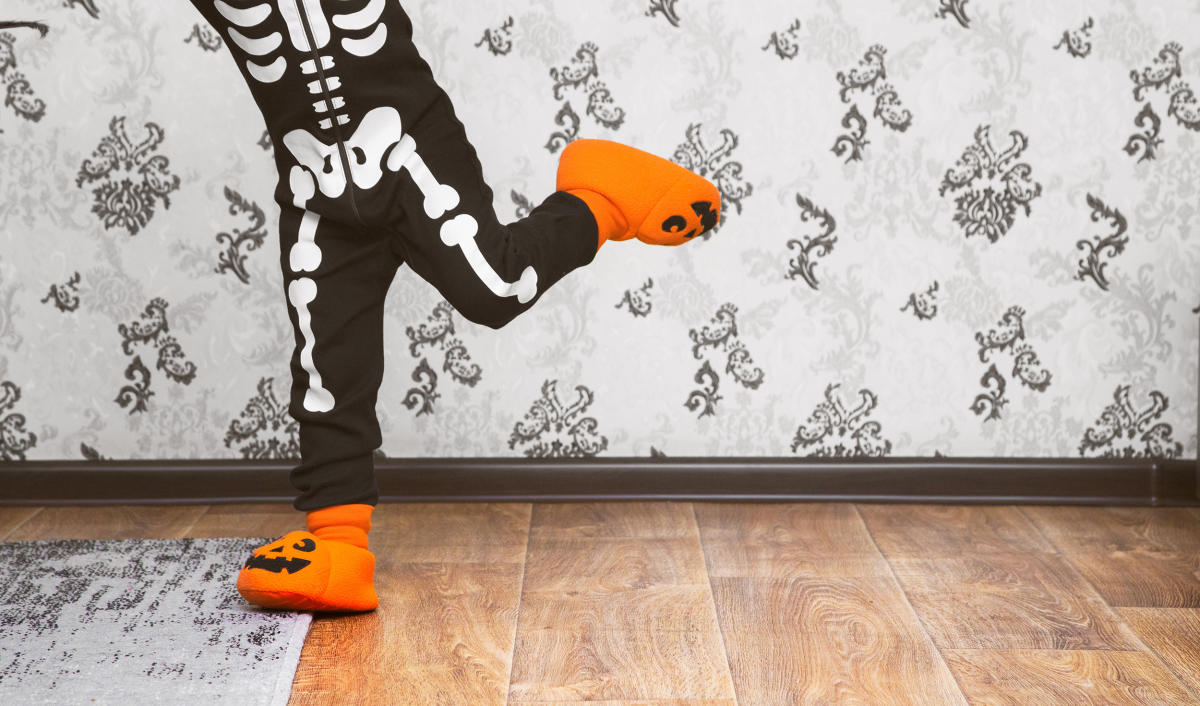 Listening to a festive playlist while driving between Halloween activities is half the fun of any holiday.

Who doesn’t love singing the lyrics to Bobby “Boris” Pickett’s iconic “Monster Mash” (we all know them, of course) or relating with Vincent Price as he warns us of the evils of the “Thriller “by Michael Jackson?

While most popular Halloween songs are generally family-friendly, a few may contain lyrics or themes that are a bit too much for the little tricksters on your team.

To minimize the scares, we’ve rounded up the best Halloween songs for kids that are just the right amount of spooky.

And just because kids love them doesn’t mean tweens, teens and adults won’t. In fact, there are plenty of classic hits that make the list like “This is Halloween” from the Halloween movie “A Nightmare Before Christmas,” as well as the theme song to “Ghostbusters.”

For complete transparency, there are a handful of tunes that will probably only appeal to toddlers (sorry, parents), but that’s okay since this is a list of children’s Halloween songs.

So turn up the volume and listen to the scary (but not too scary) music!

“Down By the Spooky Bay” by Super Simple Songs

“Down By the Bay” gets a makeover for lovers of pint-sized treats. You already know the melody and it won’t take long to learn the Halloween-themed lyrics.

Time to unearth this little gem from Bert Convy, an actor and singer who appeared in dozens of ’70s movies and TV shows like “Cannonball Run,” “Hawaii Five-O,” and “Fantasy Island.” . The groovy beat is a fun way to distract kids from the monster talk.

“It’s Halloween” sounds like something out of a Disney Halloween movie, even though it’s actually an R&B track by Canadian blues guitarist Paul James. Kids (and adults) will love the jazzy vibe and lyrics about ghosts, goblins and monsters.

“It’s Halloween” by The Citizens of Halloween

This audience delight of “The Nightmare Before Christmas” is essential on all Halloween playlists – for kids or adults. Even though the lyrics are slightly creepy (“Trick or treat until the neighbors die right”), it’s all fun.

Although Sheb Wooley never wanted this novelty song to become a Halloween classic, this catchy song about “the one-eyed, one-horned, flyaway, purple people-eater” still deserves a spot on the list.

“Witch Doctor” by Alvin and the Chipmunks

“Ooh, eeh, ooh, ah, aah, ting, tang, walla, walla, bing bang!” Try repeating this one several times quickly. Follow the lead of Alvin and the Chipmunks in this infectious cover of the 1958 song about seeking help from a wizard to cure a bad love case.

“Heffalumps and Woozles” by The Disney Studio Chorus

Who knew Winnie the Pooh could be so scary? This catchy song from the 1977 animated feature, “The Many Adventures of Winnie the Pooh,” is a bit dark, but kids will love it…even if it gives parents nightmares.

“Grim Grinning Ghosts” by The Melomenes

If you’ve been on the Haunted Mansion ride at Disney theme parks, then you know this one. “Grim Grinning Ghosts” kicks off with a spooky narration by a “ghost host” before breaking into frantic chanting. All the ghouls join us before this one is over.

“The Blob” by The Five Blobs

Once upon a time there was a horror movie in the 1950s about a giant, gelatinous blob that killed people by oozing them to death. While the movie is probably too scary for kids, its theme song certainly isn’t. Recorded by The Five Blobs (how fitting), “The Blob” is as silly as it gets.

“Friends on the Other Side” by Randy Newman

From the 2009 Disney movie “The Princess and the Frog,” Randy Newman’s “Friends on the Other Side” is a ragtime song about voodoo, magic, and all things supernatural. Although it’s slightly spooky, it’s not too scary.

It’s not officially Halloween until you hear “Ghostbusters” at least once. And there’s a good chance you hear it a lot more than that before Halloween is said and done. One of the most popular Halloween songs of all time, it’s a perennial favorite of kids and adults alike.

Creepy, spooky skeletons send shivers down your spine – and so will this trippy tune. Once you hear this Andrew Gold classic, you won’t be able to get it out of your head. Don’t say we didn’t warn you.

“Monster Mash” has been the “earth hit” for decades, making it one of the most popular Halloween songs of all time. We’re not sure what monster mash is exactly (aside from being a graveyard smash), but either way, we’re totally on board.

“Running Up That Hill” by Kate Bush

Even though “Stranger Things” isn’t age-appropriate for toddlers, this Kate Bush song from Season 4 is everywhere at present. Older kids and teens who have seen the show will know every word of it.

With the theme of “Wheels on the Bus”, this toddler-friendly song replaces the usual lyrics and replaces them with ghosts and witches. No scares here, except for parents who may not want to listen to it on repeat.

Whether it’s a Gryffindor, Slytherin, Ravenclaw or Hufflepuff, press play on “Hedwig’s Theme” and let your kids pretend to party at Hogwarts with Harry and his friends. friends.

“I Hexed You” by Bette Midler, Sarah Jessica Parker and Kathy Najimy

The cursed witches of Salem will be back this Halloween with a sequel to the 1993 movie “Hocus Pocus.” Whatever spells the Sanderson sisters conjured up for the next episode, relive the magic of the original by listening to their animated version of “I Put a Spell on You.”

“Under My Bed” by Recess Monkey

Recorded by a trio of former teachers, “Under My Bed” is a playful little song about every child’s nightmare: a monster lurking under the bed. Luckily, he’s just a lonely monster looking to make friends.

With ghouls and monsters crawling out of their graves to seal your fate (and terrorize your neighborhood while they’re at it), Michael Jackson’s “Thriller” video isn’t for the faint-hearted. That said, the song is totally family friendly and a staple on any Halloween playlist.

Take the best Disney villain songs of all time, put them together in an a cappella mashup, and you have this epic song. Here, songs from beloved villains from “The Little Mermaid” to “Beauty and the Beast” come together in a five-minute medley kids will love.

“Jump in Line” by Harry Belafonte

If you’ve seen “Beetlejuice,” you’ll remember Harry Belafonte’s “Jump in the Line” as the song Lydia Deetz dances to at the end of the movie. Of course, it’s not a Halloween song per se, but over the years it has been adopted as such, and its spirited calypso rhythm makes it a great Halloween carol.

“Halloween is Almost Here” by Pinkfong

If your little ones are counting down to the big day (Halloween!), then this earworm is for them. Adults and older children probably won’t be able to listen to it more than once or twice, but that’s okay since this song is aimed at young children and toddlers.

Jack Skellington aspires to be something more than the Pumpkin King of Halloween Town. Before he finds something more fulfilling, he sings “Jack’s Lament,” an enchanting, dissonant song that children and adults alike love.

Back in the 80s, this song about being seriously paranoid got a ton of radio airplay — before, during, and after Halloween. Maybe it’s because of the appearance of Michael Jackson.

Hear “Grim Grinning Ghosts” and “This is Halloween” in a whole new way. This a cappella mix ends with a strange invitation to hurry back. Ouch!

Something wicked comes that way in John Williams’ choral piece from the “Harry Potter and the Prisoner of Azkaban” soundtrack. It’s short, but chilling, and features the oft-repeated phrase from William Shakespeare’s “Macbeth”: “double, double labor and trouble.”

Neither children’s song nor Halloween tune, “Spooky” from Classics IV always manages to strike the right tone. And a marriage proposal on Halloween? There is nothing cuter.

“The Addams Family” by Vic Mizzy

“The Addams Family” theme song is creepy, goofy, and downright goofy, which is exactly why we love it. Add this one to your kids’ Halloween playlist and everyone will be snapping their fingers in unison.

This a cappella mix, featuring Evanescence’s “Ghostbusters,” “The Monster Mash,” and “Bring Me to Life” leaves no tombstone unturned.

Lambert, Hendricks & Ross find a way to brighten up the ghosts of the season in this retro tune. Ask the children to imitate Halloween noises or, if that’s too difficult, to create their own style.

“Guess who?” by Pinkfong

Halloween can be a scary time for little monsters, but this Pinkfong song will help them get the upper hand by introducing them to friendly, non-threatening witches, ghosts, skeletons and monsters.

Fans of “Beetlejuice” will surely remember the iconic dinner scene in which the guests become possessed and perform a haunted (and hilarious) dance to the song “Day O (The Banana Boat Song).” The Harry Belafonte tune has become the Halloween norm in the years since the film’s release.

“Clap for the Wolfman” by The Guess Who

“Clap for the Wolfman” seems to have been written about werewolves, but it’s actually about a disc jockey nicknamed “Wolfman Jack”. The song, however, is totally on theme and its catchy lyrics guarantee it will be a family favourite.

This song is not about Halloween or even dogs for that matter. But he is it’s all about candy and kids will love it for that reason.

Jinkies! Shaggy, Scooby and the rest of the gang are as popular today as they were in the 60s. Two versions of the song were recorded for the TV show: one performed by Larry Marks for Season 1, and this one e. The band Simple Plan also covered the Scooby-Doo theme song in 2002.

Although “Spooks” was recorded in 1954, it remains a Halloween song for all ages today. It starts with a creaking door and some screaming, but the kids will forget about it once Louis’ voice comes in.

This article originally appeared on TODAY.com

World premiere of composer Michael Shapiro’s “VOICES” on the Holocaust