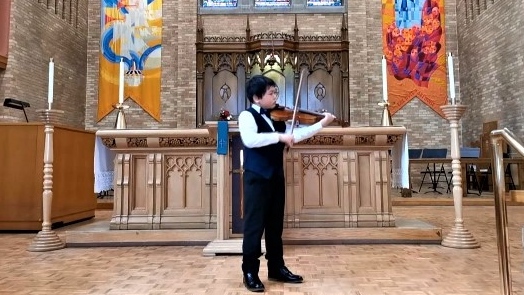 An Edmonton boy with quick fingers and a great ear for music is quickly becoming an internationally recognized musical prodigy.

While most eight-year-olds are attending Year 3 this week, Liam Ng is in Brussels, Belgium preparing for performances in Vienna, Austria and London, England.

“When I was three I really loved music, then at five and three-quarters I was taking violin lessons,” Ng told CTV News Edmonton.

“We would have toy instruments and amazingly he would be able to play a tune,” Liam’s father Angus explained.

Relying on his natural talent, Liam trains at least two hours a day and attends music lessons twice a week.

Liam Ng and his father Angus during an interview with CTV News Edmonton.

Liam was recently among the winners of the Virtuoso Grand Prize, an international music competition. This honor came with an invitation to perform at the Musikverein in Vienna and the Royal Albert Hall in London.

“There are like red chairs and Elton John’s piano is there,” Liam said, adding that he planned to take a selfie on stage. The London venue can hold more than 5,000 people, but Liam said he wasn’t nervous, thanks to his mum’s guidance.

“I’m here to show everyone, the world, music, not to compete and be stressed and breathe so hard,” he recalled.

It all happens so fast for the youngster, but his parents and teacher said they were careful not to overwhelm Liam with the pressures of competition.

“We’re very proud, but we’re also trying to remember that yes, he’s eight years old and he still has to go play outside and do other activities and finish school as well,” Angus explained.

“He loves music. We won’t break him because of pressure or anything like that. I want him to enjoy life,” Remniakova-Ostrovska said.

Liam already has a clear goal for his future, although he will probably have to finish primary school first.

“My goal is to be a soloist in the orchestra,” he said proudly.

With files from Amanda Anderson of CTV News Edmonton