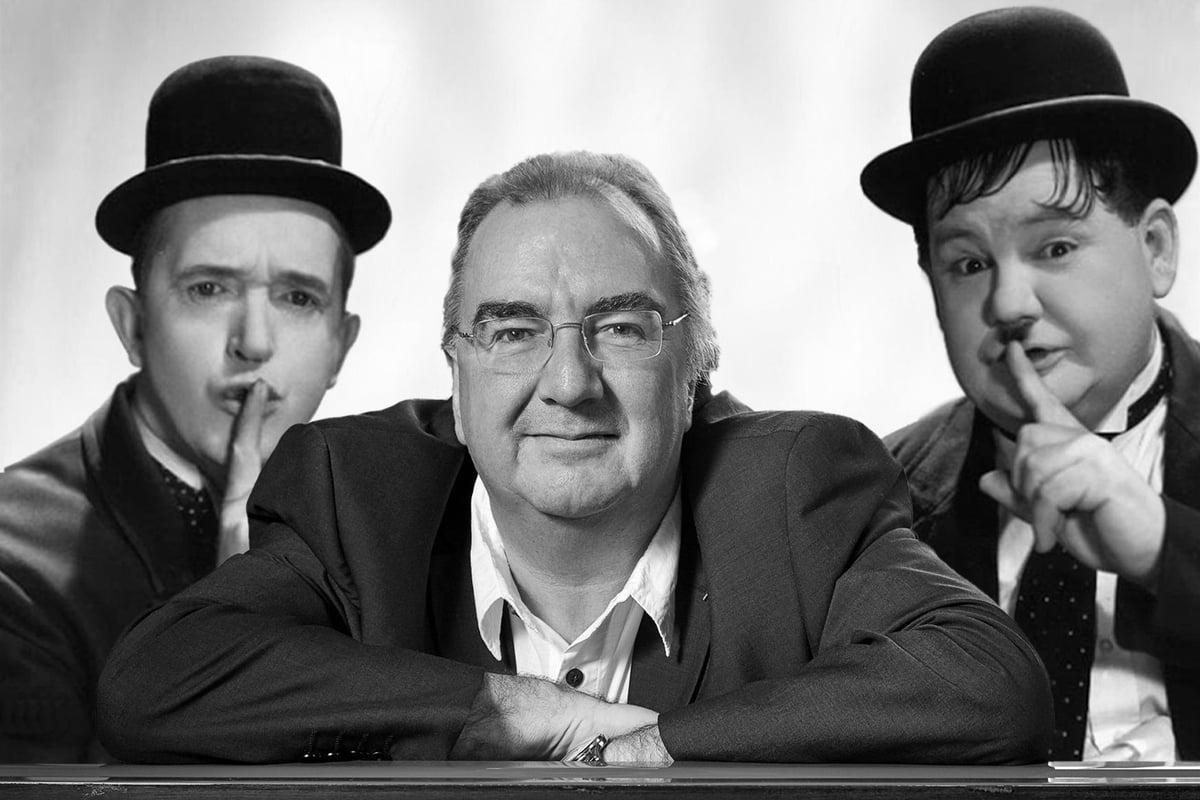 It still shines today, much more than that of their contemporaries and many laugh-makers who have succeeded since.

It’s fair to say that the double act’s profile and popularity has largely been maintained by their shorts and features such as Helpmates and Way Out West.

But one man who has done more than most to bring their first 34 silent films back into fashion is also Neil Brand.

Neil Brand with some old friends

The acclaimed pianist, composer, writer and broadcaster returns to Parbold Village Hall on October 22 with a new show, Stan and Ollie.

It will present the touching story of the greatest comedy team in the world: from their beginnings on both sides of the Atlantic, to their individual comedy films, and their silent masterpieces before the arrival of the his.

Fully illustrated with stills, clips (silent and sound) and Neil’s piano accompaniment, the show will culminate in two of Laurel and Hardy’s best silent shorts, Big Business and Liberty.

The show, whose gestation began during lockdown when 70 per cent of Neil’s regular work was on hold, is truly a labor of love for him, having been longtime fans of the pair and writing a BBC play Radio 4 titled Stan which focused on Laurel’s last visit to her dying friend and was later made into a TV movie.

Laurel and Hardy in the 1929 Liberty short

Since then, of course, there’s been another hit movie, again called Stan and Ollie, starring Steve Coogan and John C Reilly, which mostly deals with their twilight years.

Neil’s show aims, among other things, to fill in some gaps.

He said: “Steve Coogan’s movie is very good, but it didn’t really touch on their background, how they met and bonded.

“What I’ve discovered about Laurel and Hardy is that it appeals to all levels – kids from seven to 97.

“Kids love them when they see them for the first time and old people love them because they remember watching and enjoying their movies on TV.

The two films that will be screened in their entirety were made in 1929 – early in Stan and Ollie’s career – and are fantastic opportunities to see the comedy giants perfect their trademark gags.

In Big Business, they play the door-to-door Christmas tree salesmen, whose escalating argument with a reluctant customer (played by James Finlayson) results in much of the slapstick physical comedy the pair excelled at. .

Liberty delivers jaw-dropping stunts, as the Boys – playing escaped convicts – try to swap clothes as they run from the cops and end up teetering dangerously atop a half-built skyscraper.

When these shorts first hit theaters, they would inevitably have been accompanied by either a piano or an organ or a small band to make up for the lack of a soundtrack (apart from which audiences had grown accustomed to over the previous three decades since the birth of cinema). ).

And it was right out of college that Neil discovered he had an affinity for this kind of keyboard improvisation.

He said: “I’ve always loved movies and I could play the piano by ear, but I actually studied acting in college.

“When I left in 1980, I was involved with a group of college friends in running a theater company and arts center in a former cinema in Eastbourne.

“In 1984 the Eastbourne Film Society used the center to screen films and asked me if I would be interested in accompanying Buster Keaton’s Steamboat Bill Jnr. I agreed, put together about 15 minutes of material for a 1 hour and 10 minute movie and I was hoping I could go on.

“During the first performance, I discovered that I could improvise with the film and threw away most of what I had written. As audiences became increasingly drawn to Buster on screen, my confidence in finding the music for what he was doing grew and grew with each laugh, even though in the end I couldn’t remember what I had played!

“After that I contacted the National Film Theater saying I was a silent film accompanist and they would take me.

“I was auditioned to accompany a film I had never seen before and did well enough to be cast as one of their regular piano accompanists.

“I realized how easy it was for me and I must have accompanied 30 to 40 films at the end of the 1980s. It was a job that took me all over the world, playing with films from many different genres. Everything that has come since is the result of being a silent film pianist.

Besides his radio play/film Stan, Neil has acted on television, appeared in documentaries and is a prolific composer, particularly of film music. His latest project is a score of Hound of the Baskervilles which will be performed at the Barbican by the London Symphony Orchestra with Mark Gatiss and Sanjeev Bhaskar playing Holmes and Watson.

But first there is his final Parbold Douglas concert (the previous one saw Neil accompanying Keaton and Chaplin films) which takes place on Saturday October 22nd at 7.45pm.

He said, “I love playing Parbold. It is a charming place and I am always warmly welcomed there.

“Everyone will enjoy the show about two great comedians and it’s finished with two classic copper-bottomed movies.”

Tickets – £20 and just £5 for youth and students – can be booked by visiting www.parbolddouglasmusic.org, emailing [email protected] or by telephone on 01257 498452.