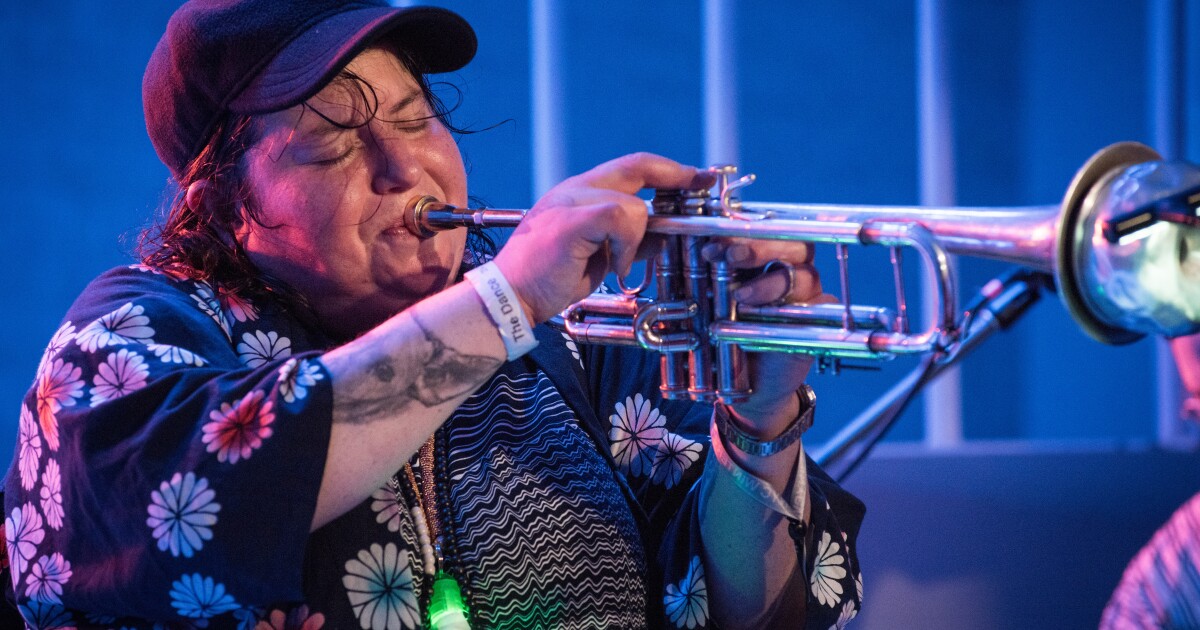 jaimie branch, a trumpeter who combined punk ferocity with advanced technique in her version of improvised music, earning praise in and far outside jazz circles, died Monday night at her home in the Red Hook section of Brooklyn , NY His death was announced by International Anthem, the Chicago-based label that released his music. (The statement, made in consultation with her family, did not provide a cause.) She was 39 years old.

branch could conjure up a world of self-expression with his trumpet, sounding brash and conflagrating one moment, mournful and contemplative the next. What she always conveyed with her horn, in any setting, was absolute full-body conviction. One of the reasons she became a beloved linchpin of the creative music community over the past decade was this spirit of bold intensity. Her demeanor, by comparison, was often hilarious, profane, and ultra-casual — qualities she alluded to with a favorite nickname, jaimie breezy branch (no caps).

He was a rising star who had garnered a global audience and had no shortage of critical acclaim over the past five years, particularly for his work with a chamber but handsomely cut band, FLY or DIE. In addition to the branch on trumpet and vocals, it featured Jason Ajemian on bass, Chad Taylor on drums, and Tomeka Reid or Lester St. Louis on cello. NPR Music recognized FLY or DIE’s self-titled debut album as one of the 50 Best Albums of 2017. (The band also made my personal list of the 10 Best Jazz Performances that year). A suite, FLY or DIE II: Bird Dogs of Paradise, landed in the Top 10 of the 2019 NPR Music Jazz Critics poll.

The trumpet wasn’t the only tool in branch’s creative arsenal: she was a skilled producer and electronic artist, and recently ventured headlong into singing, speaking and singing. As WBEZ’s Nereida Moreno reported in 2019, the branch has focused on the resurgence of nativist and racist ideologies with “prayer for amerikkka,” an article by STEAL or DIE II so titled because, as she told Moreno at the time, “this country was really founded on genocide and slavery, so let’s be real about that.”

Before she became widely known for her political stances, branch was hailed in new music circles for the dynamic range and grounded power of her trumpet playing. She was a welcome presence at the Festival of New Trumpet Music (FONT Music) in New York, which featured her as early as 2007, and on several occasions since.

“She gave us so many ideas of how the trumpet could engage in music differently,” trumpeter and composer Dave Douglas, founder of FONT Music, told NPR. “She had a vision to synthesize the voices of her inspirations and take them to new levels that no one would have thought possible. This is a tragic loss for our community.”

These inspirations spanned a spectrum, from the murmuring warmth of Chet Baker to the mischievous howl of Lester Bowie. Like Bowie and Miles Davis, another key influence, branch knew how to register its sound in the tumult of an affirmed group, sometimes sharp, sometimes digging. A version of “Theme 002” recorded in Switzerland in early 2020, and later included on FLY or DIE LIVE, finds her dancing and weaving against a springy variation on the dub beat before the beat dissolves into freeform static. It’s a neat distillation of Branch’s style as an improviser, though it’s also just an understated piece.

Born June 17, 1983 in Huntington, NY, Branch grew up in a musically supportive environment, partly inspired by the example of her half-brother, a decade her senior. She started the piano at age 3 and by age 9 she had started the trumpet. Within a few years, she later recalled, it was clear that this would be her calling.

The Branch family moved from Long Island to Chicago’s northern suburbs — Wilmette, Illinois — when Jaimie was 14. At the New England Conservatory in Boston, she studied with Charles Schlueter, then principal trumpeter of the Boston Symphony Orchestra. as seasoned improvisers like guitarist Joe Morris and trumpeter John McNeil. As a student at the NEC, she also discovered the experimental sound palette of German trumpeter Axel Dörner, immediately falling into a rabbit hole of extended technique: circular breathing, multiphonic, spectral resonance, zones of pure sound.

This burgeoning field of expertise served her well when she returned to Chicago, home to some of the most free-spirited composer-improvisers on the planet. Among her first champions was cellist Fred Lonberg-Holm, with whom she formed a trio. Before long, she had also met Ajemian, Reid and Taylor, as well as Chicago stalwarts like multi-reedist Ken Vandermark, drummer Frank Rosaly and flautist Nicole Mitchell.

Another move in 2012, to study in a graduate program at Towson University, exacerbated some personal difficulties: “Baltimore is a tough city to live in if you want to quit using heroin,” said Branch to Peter Margasak in a 2017 article for the Chicago Reader. She dropped out of Towson after two years, enrolled in a treatment program on Long Island, and ended up in Brooklyn.

She met a new generation of collaborators in New York, including tenor saxophonist James Brandon Lewis, drummer Mike Pride and guitarist Ava Mendoza. At the same time, she has retained a Chicago energy to her music – most recently in an ambient improv duo called Anteloper, featuring trumpet, electronics, percussion and vocals, with Jason Nazary on synthesizers and to the battery.

This spring, as pandemic restrictions eased enough for touring to resume, the branch took FLY or DIE back on the road. Among those dates was one at the Ruba Club in Philadelphia, presented by the non-profit workshop Ars Nova. “Jaimie has used her music as an incredible tool to connect creativity and criticism,” Mark Christman, ANW’s executive and artistic director, told NPR. “And she used this creative, improvised DIY tool to do what all great jazz artists use it to do: imagine alternative futures, deal with trauma, maintain resilience.”

branch is survived by his mother, Sally Branch; one sister, Kate Branch; two brothers, Russell and Clark Branch; and nieces and nephews. “Of all the people jaimie has touched, I’m the luckiest of them all because I’ve never known life except with jaimie and her music,” writes Kate Branch, whose loft in Red Hook served as her studio. unlikely registration for fly or die. “She was my older sister, my first teacher, my first friend, my first fight, my last fight. She was everything to me. She was the bravest person I know, on and off the stage. And life just seems too quiet now.”