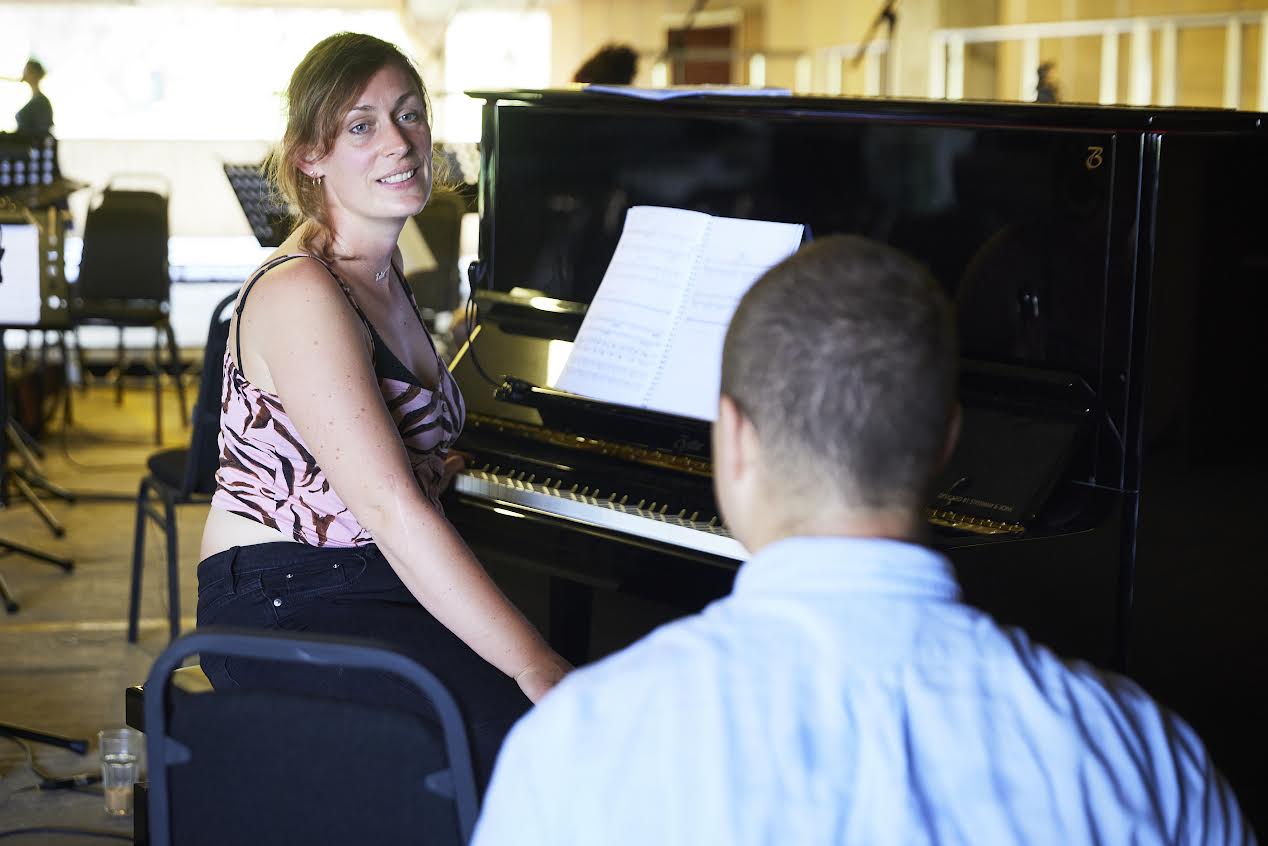 We thought parking lots might be good places to try – they’re big, they’re open, and people don’t really associate them with anything in particular. We started playing in a parking lot in Peckham, run by Bold Tendencies, and now we play there every summer. We’ve also played in other car parks across the country – in Gloucester, Ipswich, Birmingham, Portsmouth and more.

We basically did it because parking lots are more fun than formal concert halls. It gives you so much more flexibility in what atmosphere you can create. The audience can be much closer to the musicians and the atmosphere is more creative and open. I also like that you are aware of what is going on in the outside world in the parking lot. We are one level under the roof which means we are sheltered from the weather but you get great views to the sides. You can hear things like passing trains and traffic, but it never really gets in the way. People always say that they find it moving and that it adds. I would never have imagined spending my life conducting an orchestra playing in parking lots! And while playing in parking lots is probably something we’ll always do, some of the most amazing things we’ve discovered and experienced along the way go beyond the fact that it’s in a parking lot – what really matters is about finding new and better ways to create music. Most of what we do is go to schools to create large ensembles of choirs and instrumentalists who then perform with our professional orchestra. We’re not doing this as an “education” project – we’re doing it because these young people bring the most amazing creative and musical energy. This means we can create incredibly moving musical experiences that also celebrate the beauty and diversity of the local community.

It’s hugely important to us, and I’m really proud that some of the young people we’ve known for many years are now key team members and leaders in our creative work.

Following the death a few years ago of Malcolm Mide-Madariola – a former student of their school – some of our young people asked us to help them create a piece entitled The Endz in tribute and to give their perspective on gang culture through music.

It turned into an incredibly powerful piece – it’s crazy how many people who came to see it said it was one of the best things they’ve ever seen, and so many people cried. There is a highlights the movie of it here:

I think the really amazing thing about The Endz was how much ownership each had and how important it was to tell that story. That’s what made it different from what the orchestra had done before, because it really gave it purpose. This has led us to a new way of making music where we turn young people into artists and leaders and empower them to tell their own stories through music. I believe that the most moving art is created through this authenticity: it is powerful and radical voices that are essential to do something good. Much of what we think of as “art” tends to maintain social inequalities and prejudices and to exclude huge sections of our society. It’s not correct.

For me, the most powerful and meaningful artistic experiences are those that break through that – and tell stories that might otherwise go unheard. In a society where inequality and discrimination are so prevalent, it is really important to question what exists and to break down the structures that surround us. Art at its best is an opportunity to bring people together and imagine a different world. I’m not saying that we at Multi-Story Orchestra have completely solved this yet, but it’s something to aim for.

I think that’s one of the reasons music is so important to young people. – especially when music education is in decline in schools. Music – and especially creative music making – can be a way for people to feel powerful, connect with others, and be celebrated for things the normal world might not see or celebrate. be not. We now have a group of 11 young creatives in the orchestra, and I am constantly amazed by their dedication, insight and creativity. It’s amazing to see and always inspiring.

I think it’s partly because we allowed them to be part of something where they can be themselves. Rapper and drummer Toni, who we’ve known since he sang with the orchestra in elementary schools, said “Multi-Story is a place where you can be your creative self – you can be whatever you want to be” – what I really think sums up what it should be about. Being able to create, especially with other people, has gotten me through all kinds of tough times, and I think that’s really important to everyone.

Another one of our youngsters – Flame, 18 – is an amazing performer and I was really surprised when she told me that she had really struggled with confidence before. She told me that being able to be on stage and perform something of her own “made me feel invincible, and I never want to let go of that feeling no matter what I do with my life.” I don’t think there are many more important things than that.