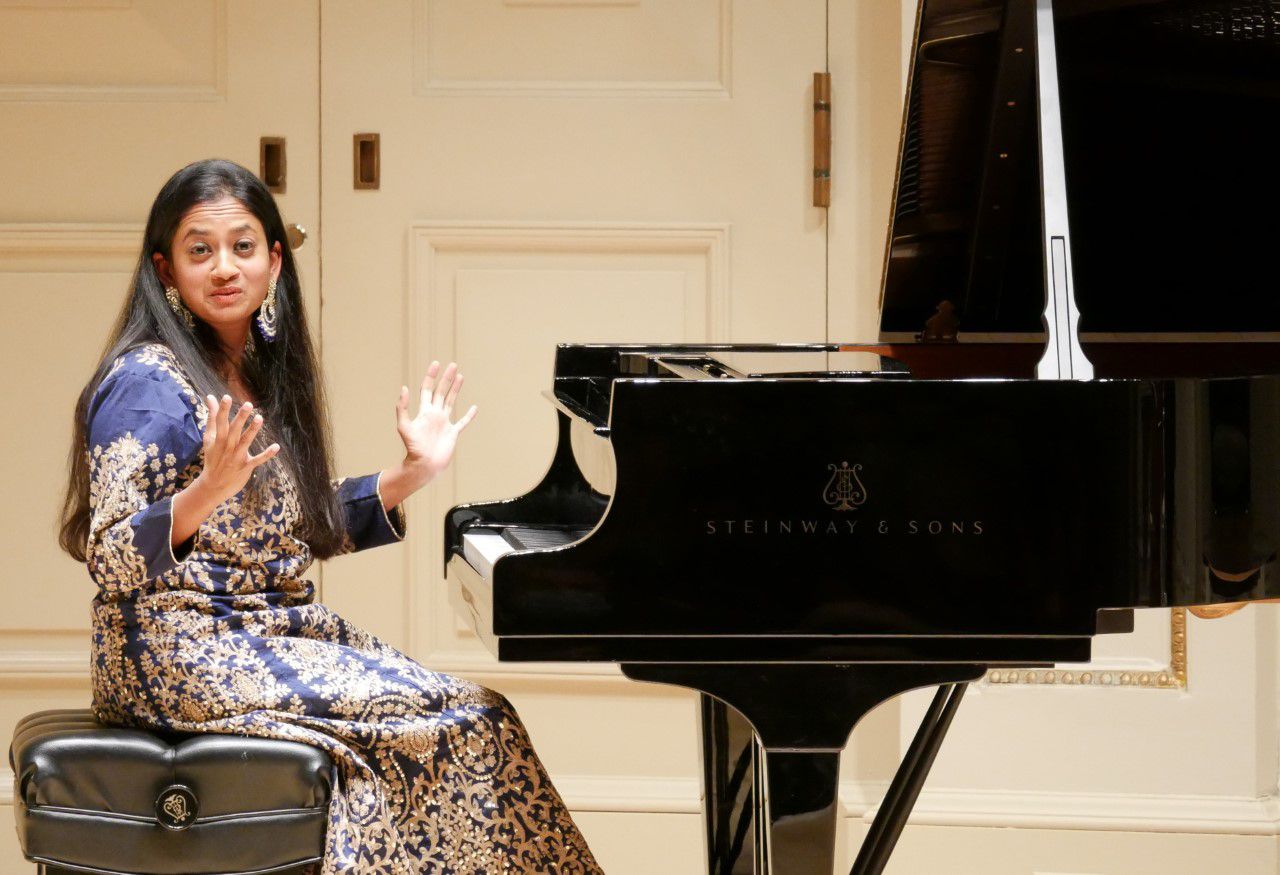 What we think of as the waltz began as dance music before becoming synonymous with classical music in its own right. As she continues to do with raga, the framework for improvisation in Indian classical music, on her new album, pianist and composer Charu Suri subtly intertwines her unique twist with form.

Produced by Lonnie Park, “Ragas & Waltzes,” released today, September 2, is dedicated to Suri’s father, who passed away last year and whose motto on the need to dance through life lit up appreciation of Suri for the genre.

The waltz sounds like an airy form – the stuff of Vince Guaraldi’s more bouncy compositions for the “Peanuts” cartoons, as much as frenzied ballroom dancing. For the Weehawken resident, whose childhood was marked by a long dedication to being a concert pianist, the waltz was just that – an airy break.

“I used to listen to a lot of Strauss with my dad,” Suri said in an interview last month. “That’s how the album was born, because we listened to ragas and waltzes together. And every year we watched the concert of the Vienna Philharmonic with the music of Strauss.

“I loved waltzes. It was like little gems, you know. Every waltz by Strauss was full of lightness, it had this joie de vivre, it had this lightness that wasn’t really from the romantic (classical) era… the heavy symphonies of Brahms and Beethoven. Strauss’ Waltzes for me were really something to look forward to. Almost like candy.

“Raga & Waltzes” contains two tracks that are odes to Suri’s father, “Waltz For My Father” and “Farewell Waltz”, both of which are particularly notable on the album.

For Suri’s father, music served as an important reminder to work nimbly with life’s most tragic elements.

“He always believed that life was going to throw wrenches at you and all sorts of things,” Suri said. “But you’re going to have to dance or waltz through or make music through, because that’s how everybody’s done it – all cultures. He lived in Africa as a child and in India. That’s how a lot of people choose to survive, it’s through that levity, through dancing, so it became kind of a motto that I took seriously.

Suri backed off a bit, realizing how many times during her childhood her father told her to take things more lightly.

“He was always like, ‘You know, you have to take it easy,'” Suri said. “And I didn’t really realize it until I faced hardships like everyone else – the hardships of finding your voice, struggling to get further in your career and all that. And the only way to deal with that was to take his motto to heart and shrug your shoulders and say you gotta move on and do your best.

Suri’s father was laid to rest in December, at the height of the emergence of the Omicron variant of the ongoing COVID pandemic.

“Obviously I had to go,” Suri said. “But I’ve never had a course like this in my life with the required tests.”

In addition to his music career, Suri is also a travel journalist and as such is generally aware of travel regulations. But in the wake of her father’s death, the intricacies of the updated protocols eluded her.

“I realized I had a 12 hour layover (on my trip home) and then my COVID test I took 72 hours ago was no longer valid because the CDC rules had changed because of Omicron, and they required every person who comes to the United States to take a test within 24 hours of entering there.

Not wanting to shell out another (approximately) $1,800 for a flight after being cleared at a local testing center, Suri rushed to the on-site testing clinic just as it was about to close.

“I said, ‘No, I need a quick antigen test,'” Suri recalled. “I bullied my way because I had no other choice.”

Suri got the test, a clear result, and was able to take off on her scheduled flight – “a miracle”, she said – but despite this extreme, touring as a musician during the pandemic has generally not been for the faint of heart.

“I travel to Miami, fly frequently to St. Croix in the Caribbean where I start a jazz series at a castle,” Suri said.

For all of those trips, Suri remembered a flurry of constant testing and trying to juggle the precautions and concerns inherent in gigs.

“It’s just an extra layer of things you have to think about, like, ‘Will there be piano there? Is there a quarter-inch cable? there a power strip?’

“It’s tough. It’s definitely not easy. I have friends who are touring now. One of them COVID has been on the road three times. It’s really tough and for the compensation you get, concert fees haven’t increased, it’s still the same, sometimes even less than what we were paid before the pandemic as budgets have thinned.

But audiences are coming back, Suri said, a fact she’s grateful for as she gears up for her busy slate — including a Jersey City stop next Friday, Sept. 9, at the Green Pear Heights Dinner Theater, 93 Franklin St. , where she will perform from 8 p.m. to 10 p.m. as part of JC Fridays. Suri will then embark on a month-long tour of India, after which she will perform for the third time at Carnegie Hall on November 18.

“People want to go out and listen to concerts and listen to music, so there’s a silver lining,” Suri said, “but I still can’t escape the fact that we’re still suffering from the effects of the coronavirus (pandemic)” .

For the concert pianist who frequently plays to packed houses, precautions are a necessary complication to accommodate as best she can.

Buy or stream “Ragas & Waltzes” and learn more about Suri and her work at https://linktr.ee/charusuri.

See ticket information for his upcoming November 18 show at Carnegie Hall at https://www.carnegiehall.org/Calendar/2022/11/18/The-Art-of-Raga-Jazz-0800PM.