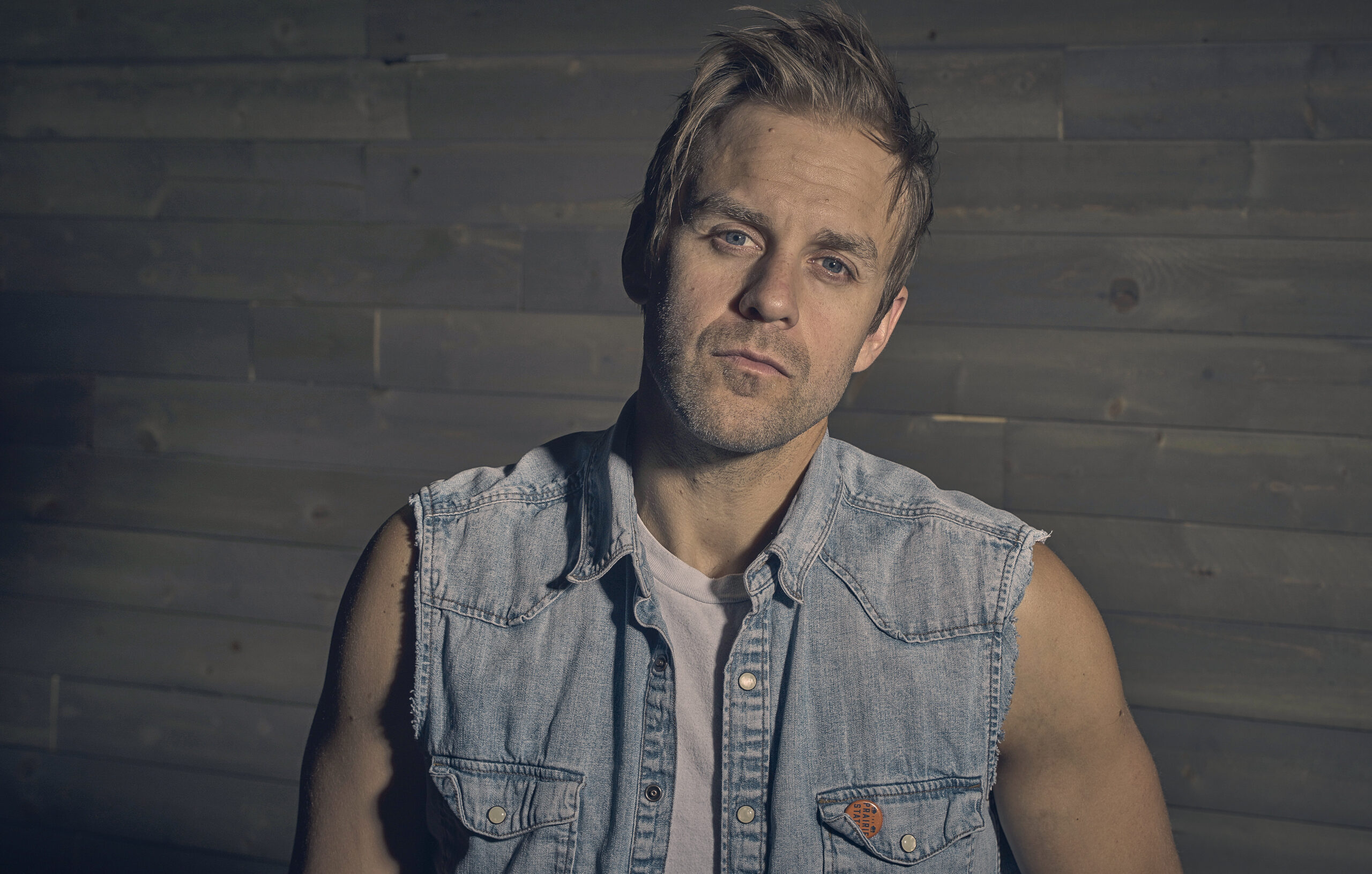 If you’re looking for a new country artist to love and a hit EP to add to your playlists, look no further! Award-winning country artist dan davidson just released their new EP Six songs until midnight and it’s an absolute must-listen.

Davidson is a Canadian-born country singer-songwriter who has taken the industry by storm over the past five years. Since stepping onto the scene, Davidson has already garnered 6 CCMA nominations, 10 ACMA Awards, Gold Record, Best Selling Canadian Song & Record, Top 20 Numbers and hundreds of performances.

To add to his already long list of accomplishments, the “Found” singer has just released his new EP. Six songs until midnight, which is now available on all streaming platforms. When he sat down with Celeb Secrets Country for an exclusive interview, Davidson said that this body of work “marks the beginning of a transition to an artist who ‘lets the music do the talking’.”

“In the past, I made my mark by making really crazy music videos and almost having a ‘pop punk of country’ vibe, but I decided to put these 6 songs together on this EP because I felt they really represented a very distinct era of my writing and my growth as an artist,” he shares.

You can read our full Q&A below, where he discusses his musical journey, the creative process behind Six songs at midnight, what’s to come for the rest of the year and more.

Don’t forget to let us know what you think of the EP by leaving a reaction at the bottom of the post or by sending us a tweet at @CS_Country. You can also connect with Dan Davidson by giving him a follow on Instagram at @itsdandavidson.

Celeb Secrets Country: Hi Dan, thanks for taking the time to chat with us. Can you introduce yourself and tell us a bit about yourself for our readers who may have just discovered you?

Dan Davidson: “Hey! My pleasure! Thank you so much for giving me the chance to talk about my new record! Sure, I’d like to give you a quick rundown 🙂 Well, I’m from St. Albert, Alberta – I grew up watching my dad sing and play piano and guitar for fun, I think it’s That’s what got me interested in music. I started loving music by listening to my parents’ records (The Eagles, Queen, Suppertramp, Lyle Lovett, Blue Rodeo and others). I started playing in punk and hard rock bands as a teenager, then went to music school after graduating. From there, I met 3 guys with whom I started the rock band Tupelo Honey. This group had a lightning career. Within a year of being together (I was 19) we were touring with Billy Talent, Metric, Three Days Grace and tons of amazing bands. Later, we even got to do a tour with Bon Jovi. After lots of live and radio success as an indie, the rock scene got a bit stale and we decided to try new things. After some introspection, I decided to make a solo career. Being a prairie boy – you can’t help but have a little ‘country’ locked away somewhere. When I started writing for my solo project, I unlocked that door and the first song that came out was “Found” which is now almost platinum in Canada. That’s what started it all – since then my country career has been going full steam ahead! In the music industry, lightning very rarely strikes twice – I’m one of the lucky ones.

CSC: You are a singer, songwriter, producer and artist now, but what made you want to pursue music or do you have a specific memory that inspired you?

NOT A WORD : “I mean, when I was a kid, rock stars were ALWAYS the pinnacle of cool. That’s what made me obsessed with bands, albums, songs and concerts. I would say if I had to identify a time when I knew I had to do this with my life, it was my 16th birthday. My dad treated me and my buddies to a day in a recording studio to do a 3 track demo. Having that experience, passing around our demo tape and seeing the kids react was definitely the highlight of my teenage years.

CSC: Congratulations on the release of your new EP “6 Songs To Midnight”, how was this release for you and how did you spend the days preparing for this release?

NOT A WORD : “It was wild! The record debuted at #1 on the Canadian iTunes country charts – so that’s super validating for me. In the last few weeks leading up to this release, I’ve been spending a lot of time on the phone with Australian radio stations actually! 2 of the tracks on this record were big singles for me – including my first top 10 song “Roll With It” with The Road Hammers. I’ve also been hard at work running contests for fans to win advanced signed physical copies and planning my launch party, which is a collaboration with Ferrari of Alberta! »

CSC: How did you decide which tracks made it to this ep, and can fans expect to hear songs that may not have made it to the project?

NOT A WORD : “I decided to put these 6 songs together on this EP because I felt they really represented a very distinct era of my songwriting and growth as an artist. The songs have the classic Dan Davidson ‘get drunk and fall in love’ type song, but there’s also this theme of ‘keep a smile on your face no matter what kind of hell life throws at you’ – this which was accidentally a great message for all of us over the past two years!

CSC: What do you hope fans and listeners will take away from this EP?

NOT A WORD : “I think with every record, we as artists just want to make that kind of “soundtrack for our lives”. I hope my fans will see personality and honesty in these songs. I certainly wasn’t trying to flatter or “fit in” anywhere specifically in the scene. This music was just fun to write and sounded really honest. My theory is that artists who have personality and aren’t afraid to show it, connect better with fans and ultimately stick around longer. That’s the point !”

CSC: This also marks the beginning of a new era of maturity for you. What made you want to move on to a more mature route and what fans can expect from this new era

NOT A WORD : “Well, I think this record sort of marks the beginning of my transition into being an artist who “lets the music do the talking”. In the past, I’ve made my mark doing really crazy music videos and almost having a “pop punk of country” vibe. I just want to do my best not to repeat myself, to challenge myself as an artist and to rise to this larger than life international act.

CSC: You’ve accomplished a lot so far in your career, working with people like Gord Bamford and Tim Hick, but you also have 6 CCMA nominations, 10 CMAB awards. What’s next for you, do you have any dreams or goals on a vision board for your future?

NOT A WORD : “Yes definitely! Well, I’m up for 6 CMAB awards this year, and hope to get some CCMA and Juno love too in the near future, of course – but awards aren’t everything. Rewards are kind of funny, aren’t they? Like you can’t “win” the music…it’s not hockey…but it’s nice to be recognized for your hard work! My main driver is to continue to grow internationally and to put butts in the seats. This is what really determines the value of an artist. I think it all starts with great music and real connection with the fans…all the fun things fall into place after that. Coming Soon – I’m booking my summer right now with festivals across Canada. I also have a few gigs in France, Spain and the UK coming up! Hopefully later this year I’ll be heading to Australia as well, a place that’s been really receptive to my tracks so far.

CSC: If you could describe upcoming projects in three words, what would they be and why?

NOT A WORD : “International, exciting and growing! I already have the whole NEXT EP written and almost recorded. I’ve set my goal bigger than ever and my team is slowly growing which feels like it’s just the beginning :)”

CSC: Finally, since we are Celeb Secrets, what is there about you or your music that people may not know?

NOT A WORD : “I once went to a party with Johnny Knoxville and helped him retrieve a girl’s purse from an 8th floor fire escape with a contraption made up of 15 coat hangers. True story.”

LISTEN TO SIX MIDNIGHT SONGS BELOW: