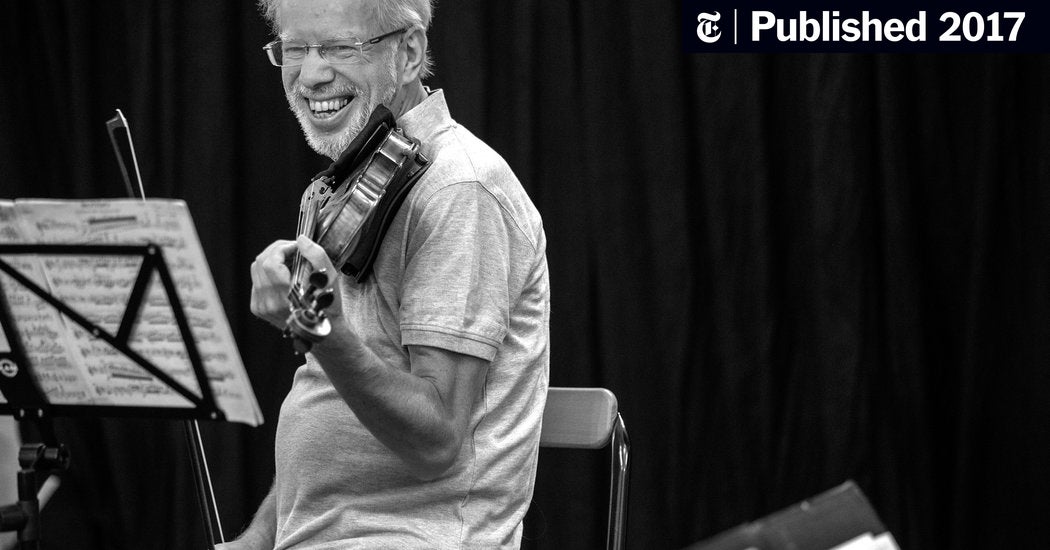 Gidon Kremer: a violinist on a mission, or more

Gidon Kremer, the Latvian Russian-trained violin virtuoso who turns 70 next month, has never shied away from linking his art and politics.

On a North American tour that just started with concerts in Boston and arrives at 92nd Street Y with a February 2 concert by Mr. Kremer’s chamber orchestra, Kremerata Baltica, he’s pushing a social agenda, otherwise political. . The second half of the chamber music program is titled “Russia: Masks & Faces”, and its centerpiece is Mussorgsky’s “Pictures at an Exhibition” in a new orchestration, with projected images of paintings.

But the paintings are not those of Viktor Hartmann which inspired Mussorgsky’s work. They are, according to Kremer, “images from another exhibition” painted by Maxim Kantor, a Russian artist and social commentator.

â€œIt’s a statement for our time,â€ Mr. Kremer said. â€œThis is a joint statement by two artists who talk about the same subject: political oppression, those in power and those in difficulty.

Mr. Kremer, interviewed at his hotel near Lincoln Center, spoke with a quiet intimacy that belied his passion and contrasted starkly with the command he shows in the stage performance.

â€œI can’t say anything about American artists these days, but I do feel solidarity with Meryl Streep,â€ he said of his recent Golden Globe speech. â€œI loved his passionate and sympathetic speech from the very first word to the very last. The whole election campaign was full of so many familiar Russian lies, but it was very surprising to me that on the other side of the world so many people feel like they want these lies to prevail.

Mr. Kremer always seemed like a man on a mission, or several of them. In addition to a new “Pictures from an Exhibition”, in recent years he has focused on Mieczyslaw Weinberg, a little-known Polish composer who died in 1996 and who was, as Mr. Kremer continues to show, perhaps as prolific as Shostakovich and barely less gifted. Weinberg is the latest in a series of more or less hidden masters of the 20th century, many of whom are still active and some women, whose music Mr. Kremer discovered and championed.

â€œWeinberg is an incredible example of a personality who is kind of overlooked,â€ he said. â€œNeglected by me too. I have to say it was a big mistake on my part not to have discovered it sooner. But you see, sometimes it takes a while, like fine wine.

To open his tour, he played the 1959 Weinberg Violin Concerto, a melodious work traditionally performed by Shostakovich, with the Boston Symphony Orchestra and the National Symphony Orchestra in Washington. He then traveled across the United States and Canada with Kremerata Baltica, playing the â€œPicturesâ€ program, which also included Weinberg’s elegant Chamber Symphony No. 4 (1992), the composer’s last completed work.

In the meantime, ECM New Series will release Kremerata recordings of Weinberg’s four chamber symphonies, as well as an orchestration of the Piano Quintet. (Deutsche Grammophon, who recently released a 22-CD set of recordings of Mr. Kremer concertos for the label, will soon add a record of Rachmaninoff’s two piano trios performed by Mr. Kremer, pianist Daniil Trifonov and cellist Giedre Dirvanauskaite.)

Another of Mr. Kremer’s current missions is the Kremerata itself, an elite group of young musicians from the Baltic states. It was founded by Mr. Kremer in 1997, to celebrate his 50th birthday, and thus celebrates his own birthday. Usually conducted from the violin by Mr. Kremer, it also performs conducted by others (the burgeoning Lithuanian maestra Mirga Grazinyte-Tyla, for example, in the Fourth Chamber Symphony on ECM) or without direction, as in this visit to New York.

â€œIt’s kind of a family,â€ Mr. Kremer said. â€œI’m very happy to have kept the same spirit for 20 years – young, adventurous, lack of routine – and it also makes me want to continue as long as possible with the group. But I also try to build a bridge so that they have a future. They can be independent.

The allusive and somewhat impenetrable project “Images of an Exhibition” is a kind of activity that he continues to explore with the Kremerata. There is, for example, the â€œSnowShow Symphonyâ€, a collaboration with circus artist Slava Polunin, known internationally for â€œSlava’s SnowShowâ€. This production, Mr Kremer said, is not political but “a very poetic exercise”. (Either way, the image of the normally poker-faced Mr. Kremer playing with a red clown nose is priceless.)

There is also â€œImages of the Eastâ€, a â€œdeclaration on refugees, on peace and loveâ€, in the words of Mr. Kremer, produced in collaboration with Nizar Ali Badr, a Syrian sculptor who recounts stories with arrangements of pebbles. An animated film is in preparation.

â€œI sympathize with all the suffering in the Middle East,â€ Mr. Kremer said, â€œand I want the world to be a better place. I know what I can do with my violin or with my music is just a drop in the ocean, but I would be ashamed not to deliver that drop if I can.

Mr Kremer was born in Riga in 1947, with roots that run “deep in many directions,” he said: “Swedish, German, Jewish, Baltic, whatever.” He studied with the great violinist David Oistrakh and others in Moscow and won prizes in major competitions, including the prestigious Tchaikovsky, in Moscow in 1970. But for some reason (he claims not to know to this day) , the Soviets blocked much of its international travel, especially to the West.

In 1975, his world turned on its axis. He quickly developed a worldwide reputation for his brilliant technique and the intensity of his playing, but he also showed an underlying exploratory daring. He made a calling card of Beethoven’s Violin Concerto, playing it with surprising new cadences from Alfred Schnittke. His solo career has exploded, creating demand that remains strong.

But there were also other dimensions to his personality, a thoughtfulness and reserve little touched by the glare and the glare of the celebrity. He disappeared on long sabbaticals, traveling to the North Pole and elsewhere.

He always knew how to play the warhorse concertos and sonatas with the best of them, but it was never enough. He went in search of little-known music, the new – like Schnittke, Arvo PÃ¤rt, Sofia Gubaidulina and Philip Glass – and the old one. He once said that his favorite composer was Schumann, an unexpected choice for a violinist; now he says Schubert, equally surprisingly. (Bach, whose solo sonatas and partitas are three times recorded by Mr. Kremer, is simply â€œfrom another planet.â€) Such loves may explain his long-standing involvement in chamber music. He helped found the Lockenhaus Chamber Music Festival in Austria in 1981 and served as its artistic director for three decades.

â€œI don’t miss it,â€ he said. â€œI lived 30 years of happy Lockenhaus, but at one point I had to say, ‘This is it’, because I didn’t want to repeat the formulas that I was using that were successful. In 2011, of course, Mr. Kremer was completely immersed in the Kremerata. (The current artistic director of Lockenhaus is Franco-German cellist Nicolas Altstaedt.)

â€œI really feel like I have lived many lives and accomplished more than I could ever dream of,â€ said Mr. Kremer. â€œI’m looking for things that I can still accomplish that others might not do. This is why the Weinberg project is so important to me, because I feel that I have found this music to be valuable. I believe in it, and I must also make others believe it.

Given the scale of his production, Weinberg will continue to keep Mr. Kremer busy for some time. He still gives a hundred concerts a year: “Too many,” he said. He couldn’t give in this year because of the double birthday (his own and that of his ensemble), and he no longer takes long sabbaticals.

But he would like to be able to cut back and relax at home for a few weeks at a time, if only he could find a place to call home. He has residences in Vilnius, Lithuania, and in the Basel region of Switzerland. He has two adult daughters in Riga and New York.

â€œEven in Latvia for a while I felt like a foreigner, I was treated like a foreigner,â€ he said. â€œI have a really hard time positioning myself. It sounds too pretentious and too pathetic to say that music is my home. But my home, I would say, is my friendships, whether with composers or fellow Kremerata.

Although intensely engaged with both the past and the present, Mr. Kremer derives his motto from the title of a work he recently performed in Berlin, â€œIn Tempus Praesensâ€ by Ms. Gubaidulina.

â€œI try to be on stage in tempus present,â€ he says, â€œto live my life in tempus present, not to look nostalgically at 30 years of Lockenhaus or the 500 conductors with whom I have played. Everything has passed. And a successful concert is already yesterday. It has to be done over and over again. “