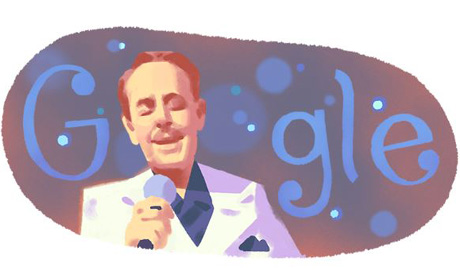 Google Middle East marked what would have been the 76th birthday of the late Lebanese singer, songwriter and actor Melhem Barakat on Sunday with a special doodle.

The doodle was created by Doodler Kevin Laughlin.

Born August 15, 1945 in Kfarshima, Lebanon, Barakat is considered one of Lebanon’s most distinguished musicians.

“Acclaimed for his unique musical style and extraordinary live performances, Barakat prided himself on being one of the few musicians to perform primarily in colloquial Lebanese Arabic throughout his iconic career,” reads the Google commentary. .

Melhem’s father was a carpenter and taught him to play the oud.

Barakat dropped out of school at the age of 18 and chose to pursue musical training at the National Institute of Music. While studying music behind his father’s back, Barakat focused on oriental singing. However, he also left music school to embark on a full-fledged musical career which in his early days saw him performing in musicals and operettas staged by the famous Rahbani brothers.

â€œAs his career progressed, Barakat began to compose original music and developed a distinctive style that combined classical elements with improvisation. He established a huge fan base across the Arab world and went on to appear in several Lebanese films in the 1980s. His powerful voice resonated across the world as he toured internationally, from Australia to the US In addition, he collaborated with some of the singers most famous in the Arab world and continued to compose music throughout his life, â€says Google’s note.

Barakat’s songs have become well known in the Arab world, many of them have been sung by his ex-wife May Hariri as well as Najwa Karam, Karol Sakr, Shatha Hassoun, Majida El Roumi, Sabah, Samira Tewfik, Wadih El Safi, among others.

Barakat died on October 28, 2016 at HÃ´tel-Dieu de France Hospital in Achrafieh, Lebanon, at the age of 71.

The scope of the doodle covers countries in the Middle East and North Africa.

For more arts and culture news and updates, follow Ahram Online Arts and Culture on Twitter at @AhramOnlineArts and on Facebook at Ahram Online: Arts & Culture

Javed Akhtar: “It is only greed for money that drives filmmakers to put songs in today’s films”