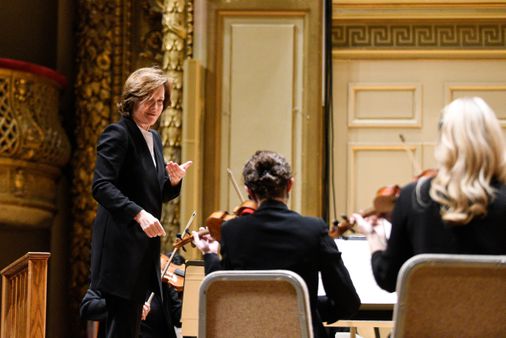 â€œShe’s a 19th century French composer, in Beethoven’s time,â€ I heard a man explain to a well-dressed elderly woman entering Symphony Hall on Friday night. It was not difficult to deduce that this was a sequel to the question “who is Louise Farrenc?” “Or” who is this composer whom I have never heard of, whose music is performed this evening by the Handel and Haydn Society. ? “

As the classical music world scrambles to extend the canon of the common practice period beyond standard dead white men, Farrenc – a pianist, composer, and educator who was the first female professor at the Paris Conservatory – is become one of the many women whose music is belatedly acclaimed. On Friday evening at Symphony Hall, French conductor Laurence Equilbey made her H + H debut with the very first performance of the Orchester de la SociÃ©tÃ© Handel et Haydn de Farrenc, who was ten years old at the time of the foundation of the Handel and Haydn Society in 1815..

With Insula Orchestra, the period instrument ensemble based in France that she founded in 2012, Equilbey has carried the torch of Farrenc and other unknown composers for several years; Last summer, Equilbey and Insula celebrated the release of an album on Warner Classics featuring Farrenc’s Symphonies Nos 1 and 3. Farrenc’s Symphony No. 3 with Beethoven’s Symphony No. 6, â€œPastoraleâ€, is on the H&H program this weekend.

In a historical sense, it was a premonitory gesture. Parisian audiences of Farrenc’s day preferred opera and chamber music to symphonic music, and for the Conservatory orchestra, which premiered Farrenc’s Symphony No. 3, Beethoven was the undisputed king. From a current programming standpoint, it was also smart; Beethoven’s joyous â€œPastoralâ€ symphony will fill the seats no matter what is in the other half of the program. Friday drew a respectable sized crowd to Symphony Hall, and it’s probably safe to say that both Farrenc and Equilbey have new admirers.

The orchestra greeted Farrenc’s symphony like an old friend, without any tenacity about it. Clarinetist Eric Hoeprich introduced the second lullaby-like movement with a languid, liquid solo; even without programmatic Beethoven-style imagery, there was a lot of pastoral care about the Farrenc symphony. Principal violin Aisslinn Nosky gathered the strings through the twisty and fast scherzo of the third movement, interrupted by a distinguished trio with a horn melody that clearly sounded like “A-Hunting We Will Go”. The unaffected and deeply nuanced performance was perhaps the best case that could have been done for Farrenc’s full inclusion in the canon; why not a Louise Farrenc symphony instead of a new cover of something by Robert Schumann or Felix Mendelssohn?

While Equilbey and the orchestra treated the unknown piece like a beloved chestnut, they treated Beethoven’s Symphony No.6 as something fresh and without expectations. Equilbey’s approach was lean and unfussy, emphasizing the darker hues of the generally relentlessly sunny symphony. It was particularly revealing in the second movement, “Scene by the Brook”. Even the fullest textures were surprisingly transparent, showing the depth and nuance of Beethoven’s orchestration. The repetitive peasant dance of the third movement often bogs down with a syrupy sheen, but the peasants of Equilbey were deliciously quick, giving the passage of time cut a harsh contrast. Timpanist Jonathan Hess spoke of a violent storm that blew up several spectators in their seats, before the tender hymn of the finale cast a golden light on everything. The evening ended with a surprise encore, the opening â€œThe Ruins of Athensâ€ by Beethoven; the symphony duo had seemed like a complete evening on its own, but I wasn’t going to deny a few extra minutes in the world the band on stage had created.