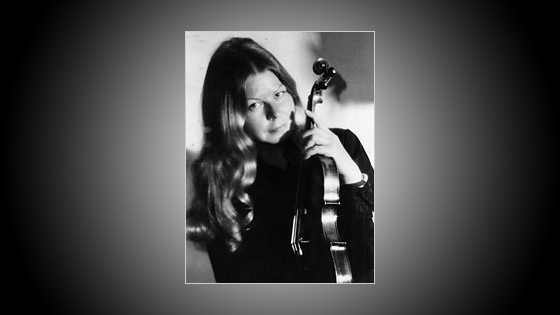 Remembering violinist Helen Hagnes, 40 years after her murder at the Met

On the evening of July 23, 1980, I was one of the violinists in the pit of the Metropolitan Opera House in New York. The Berlin Ballet was in town with guest artists Galina Panov, Valery Panov and Rudolf Nureyev. The program for this Wednesday evening was Firebird, Five Tangos, Don Quixote and Miss Julie.

We played Firebird, then left the pit for a long interval – Five Tangos used music by Astor Piazzolla that didn’t involve us. Like most musicians, I made my way to the canteen, grabbed some coffee, and hung around the backstage maze.

As we returned to the pit for Don Quixote, we waited for the close succession of the magnificent Metropolitan Opera chandeliers going up, lights lowered, a silent audience, the closing of the pit door and finally the â€œAâ€ of the oboe.

For maybe a minute, it wasn’t strange that Helen Hagnes, the violinist sitting across from me, wasn’t here yet. But over time, we kept turning our heads towards the door. No HÃ©lÃ¨ne. Fearing that she might suddenly fall ill, I took her violin, which she had left on her chair, and put it in its case outside the pit. The act has begun.

To say that it was “strange” that she could not be found even after the performance seems oddly passive, but I don’t know what other word to use, as any scenario such as what actually happened was unthinkable, especially in the fortress. that is the Metropolitan Opera House. As efforts to contact her began, I walked ten blocks north along Broadway to my little apartment on West 75th Street, the same street where Helen lived, a block down the street from the is.

(Editor: Here’s more on what happened to her: She was murdered – tied up, gagged and thrown into a six-story ventilation shaft.)

That afternoon, we were back at the Met for one-on-one police interviews, followed by an 8pm highlight for Valery Panov’s ballet â€œThe Idiotâ€, based on Dostoyevsky’s novel. The terrifying first notes of the ballet, taken from Shostakovich’s symphonies, made the shocked orchestra shiver. In the third act of the ballet, the heroine, Nastasya Filippovna, is murdered.

This July 23 marks the fortieth anniversary of that terrible night at the Metropolitan Opera House.

Helen was one of those colleagues I worked with frequently but never really got to know. My first memory of her dates back to a decade earlier, in 1970, at the Spoleto Festival dei Due Mondi in Italy.

Above, Spoleto, Italy, 1970: Tom SuÃ¡rez and Helen Hagnes, a screenshot from a film from Luciano Berio’s series C’Ã¨ Musica e Musica, in which we were interviewed by Radiotelevisione italiana during the Festival dei due Mondi

She was the youngest of three sisters raised on a poultry farm in Aldergrove, British Columbia, where her Swedish parents had emigrated from Finland. She was married to the late Janis Mintiks, a sculptor. Helen’s sister, Delcie Hill, described Helen’s early years to The Associated Press: Their parents devoted a lot of time, effort and money to Helen’s music, and for eight years, until the age of 19, Helen was taken by the family truck to Vancouver for violin lessons. She had previously performed solo with the Seattle Symphony before leaving Canada to enroll at Julliard, where she completed a bachelor’s and master’s degree. After pursuing studies in Italy and Switzerland, she returned to New York to study with Nathan Milstein.

One day, during Helen’s Juilliard years, she and pianist Judith Olson passed each other in the hallway and started chatting. Not only were they both of Scandinavian descent, Judith had also grown up on a farm. They quickly became inseparable. Their friendship expanded into a close musical collaboration, playing numerous recitals and embarking on two cruises hosted by academics from Harvard and Yale.

Shortly before Helen’s murder, Judith herself had narrowly escaped a parallel fate. In the elevator of the building that I had frequented years earlier for lessons with Ivan Galamian, Judith, there to rehearse Walton’s violin concerto with Kyung Wha Chung, was attacked in the elevator and forced to go upstairs. the roof, oddly reflecting what was to happen to Helen.

Helen’s body was discovered too late for the crime to be in the morning papers. Friends tried to reach Judith by phone – landline at the time, of course – but missed her. The next morning, on the 25th, she opened the door to her apartment to retrieve today’s New York Times, saw the photo of Helen on the lower right of the front page, and fell to the floor. 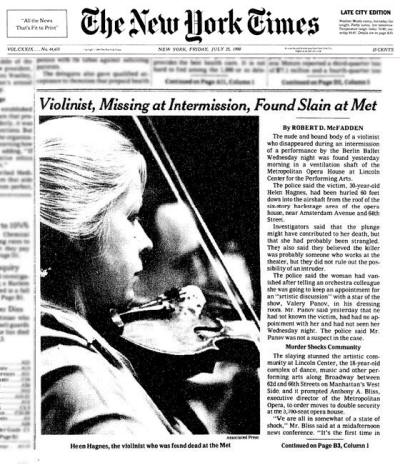 When Judith delivered Helen’s eulogy at St. Peter’s Lutheran Church in Manhattan on Tuesday, July 29, her grief was filled with terror – terror that the killer was selective, serial and present. More than a month will pass before Metropolitan Opera employee Craig Crimmins, then 21, is arrested and ultimately sentenced.

Helen was neat and tidy – â€œmaid,â€ as Judith puts it – unlike Judith. She described them both as “funny”, short for the great pleasure they had together. When on the high seas, they were supposed to participate in the ship’s costume party but did not have costumes, they inspected their room and retrieved her scarce provisions for “props”. The violin-piano duo attended the party as a shower and douche-ee, Judith the shower and shower curtain, Helen wrapped in a towel under the “spigot”, with beer can curlers. (They won first prize.)

During this successful journey, Helen, whose convictions included reincarnation, came face to face with what she had long believed to be at home in her distant past: Egypt. Her feeling was so deep that in this land her ancient roots lay, that she made Janis promise that he would bring her ashes to her to rest there if anything happened to her.

Suddenly confronted with this reality, Janis searched for a way to honor her wish despite the lack of funds and relevant logistical knowledge. So he wrote to Egyptian President Anwar Sadat. Sadat organized thefts for the ashes of Janis and Helen. Judith Olson today, holding a photo of herself and Helen in Istanbul, mid-1970s

This article has been archived and is no longer accepting comments.