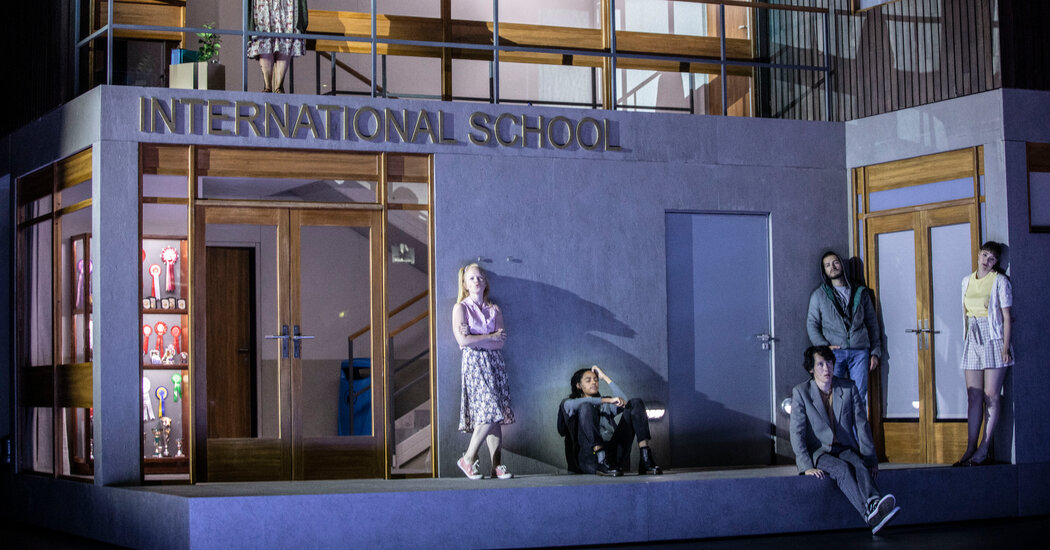 Review: a composer creates her masterpiece with “innocence”

It’s only seconds of music, but a vibe has set in – holistic, unforgettable, yet subtle. Before knowing the plot of “Innocence”, we feel it: something dark and deep has happened, from which memory vibrates in an uncertain future, etched by mourning.

We feel it over the next hundred minutes, as we get to know a tragedy and its reverberations intimately. Big but restrained, a thriller that’s also a meditation, “Innocence” is the most powerful work Saariaho has written in a career now in its fifth decade.

Appearing until July 12 here at the Festival d’Aix-en-Provence (and airing on arte.tv on Saturday) after its scheduled debut was canceled in 2020, it would be the premiere of the year even in normal season – even if its audiences weren’t so hungry for real, big, important live opera after so many largely months without. He deserves to travel well beyond an already global itinerary: Helsinki, Amsterdam, London, San Francisco, the Metropolitan Opera in New York.

It is undoubtedly the work of a mature master, mastering his resources so perfectly that she can concentrate simply on telling a story and enlightening characters. Unlike so many contemporary operas, “Innocence” – starring the mighty London Symphony Orchestra, conducted with sensitivity and control by Susanna Malkki – does not sound like a piece sung with a more or less disconnected and thoroughly egocentric orchestral soundtrack. .

Indeed, during the performance I attended, on Tuesday, I periodically tried to listen exclusively to the instrumental lines and their playing, but despite the obvious virtuosity and density of the score, my ears were constantly rising towards the stage, towards lucidity, inexorable action, all integrated theatrical. Porous and agile; quivering under and around voices; and only occasionally, briefly exploding, is music as a vehicle to explore and intensify the drama. It is complex, but secure enough to exist not only for itself.

With a libretto by Finnish writer Sofi Oksanen and translation work into over half a dozen languages â€‹â€‹by Aleksi BarriÃ¨re, “Innocence” is set in 21st-century Helsinki, where a deadly shooting took place in an international school. The action continually oscillates between a memory of the disaster, by six students and a teacher who experienced it, and a wedding party that takes place 10 years later.

It quickly becomes clear that the two events are linked. The groom is the shooter’s brother, and his family, who have been ostracized and desperate to get past what happened, have kept everything hidden from the bride. (If that wasn’t enough, there’s a reason a waitress prowls, jawbone clenched, on the margins of the wedding: She’s the mother of one of the victims.)

There are many lyrical precedents for an innocent young woman blindly guided by her lover into a world of violence and deception: think of Bartok’s â€œBluebeard Castleâ€ and Debussy’s â€œPellÃ©as et MÃ©lisandeâ€. â€œInnocenceâ€ recalls these, as well as the ferocious economy of Berg’s â€œWozzeckâ€ and Strauss’s â€œElektraâ€ in its relatively modest length and without intermission.

But “Innocence” is very much of our time, and – in its play of several languages â€‹â€‹and registers of speech and song – quite itself. Saariaho gave him the provisional title â€œFrescoâ€; she was inspired, she said, by â€œThe Last Supper,â€ from which she derived the size of the cast (13 soloists) and the play’s larger questions of guilt and related but separate experiences. people who shared trauma.

The members of the wedding party sing: the groom, a tenor, in loud exhortations; the bride, a soprano, with sweet lyricism. A priest, the only remaining friend of the family, ominously murmurs the faith he has lost.

The surviving pupils and the teacher, on the other hand, speak – albeit at precise rhythms skillfully adapted to their respective languages, Czech, Swedish, French, German, Spanish, Greek and L ‘English. The waitress’ daughter, Marketa (a memorably delighted Vilma Jaa), appears as a sort of ghost, singing in the strangely simple style of Finnish folk music. The Estonian Philharmonic Chamber Choir sings behind the scenes, a hint of a world beyond the feverish greenhouse of intrigue. All of these disparate vocal worlds are linked by the orchestra, which envelops the singers with lightness and elegance – never explicitly emphasizing them, never in competition.

The cast corresponds to the score of Saariaho in his commitment and his discipline, his refusal to fall into overplay or the Grand Guignol. As a waitress, Magdalena Kozena is a laser beam of pain; as the groom’s mother, Sandrine Piau evokes the disturbing effect of a voice thinned by suffering.

Saariaho’s past operas – starting with the stylized medieval parable “L’Amour de Loin” (2000) – were mostly collaborations with director Peter Sellars, who even lends canonical works the abstraction of ritual. Here, however, it benefits from a hypernaturalist staging by Simon Stone, whose style anchors “Innocence” in reality without skimping on its surreal fluidity. (Chloe Lamford’s rotating and ever-changing two-story set, an anxiety-inducing amalgamation of school and restaurant, is a crucial part of the drama.)

The story unfolds with the overwhelming inevitability – and sickening surprises – of ancient Greek drama. Varying degrees of guilt slowly escape the shooter to encompass even seemingly blameless characters. A firearm was inadvertently supplied; suspicious behavior has not been reported; a boy was mercilessly teased and assaulted.

This is not an unfamiliar plot, and like any great opera, “Innocence” would seem flat if its lyrics were delivered as a play. It is thanks to the music that it has rather disturbing nuances; varieties of vocalization; Saariaho’s indication, even as she delivers a clear story, that there is much beyond what is stated. Opera, as it always has been, here is a hotbed of emotions which might seem downright, implausibly extreme, but which are again made mysterious and natural.

â€œInnocenceâ€ also deepens in the politics and history from which it emerged. Watching events like this, in this period, unfold in and around an international school, it is hard not to think of Europe itself, and its formation as a union as a result. of unspeakable violence. There was a dream that the trauma would prove to be unifying; we have witnessed the gradual realization that the opposite is true. By switching from earlier times – indigenous languages â€‹â€‹and folk songs – to the lingua franca of English and musical modernism, this stage society seems to have gained little. Certainly not the capacity to fully integrate new members, to function.

However, the last moments of the opera are not without some desperate hope. Students describe the small steps they took to get past the tragedy; the vision of the girl asks the waitress to stop buying her birthday presents, to let her go. The music seethes sadly at this, but the dissonance goes through a sublime moment of consonance – courting the sun – before relapsing into tension, then sweating upward in a sheer, almost tonal shimmer. So it is both through and beyond music that Saariaho comes to an end, if not happy, strangely, completely exhilarating.

Until July 12 at the Festival d’Aix-en-Provence, France; and broadcast live on arte.tv on July 10; festival-aix.com.

Scots-Irish Songs of The South – The links between Scotland, Ireland and the southern United States