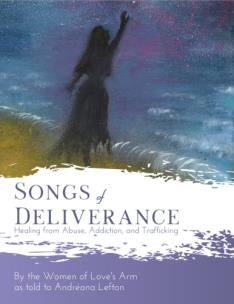 AndrÃ©ana Lefton has released a new book, Songs of Deliverance. Ms Lefton’s job was to interview women affected by ministries at Love’s Arm, a Chattanooga-based ministry that helps women survivors of trafficking, prostitution and drug addiction.

During a virtual book launch, Songs of Deliverance was officially released to the public. The moving collection of stories from survivors of trafficking, prostitution and drug addiction provide first-hand testimonies from women whose stories are real, raw and honest, officials said.

â€œMy story is not unique,â€ â€‹â€‹said Love’s Arm founder Mimi Nikkel, â€œand it’s tragic. Too many women face similar circumstances to this book, and my goal in telling my story and in creating Love’s Arm is to help others escape this life, break the cycle and find a life worth living through the redemptive power of unconditional love and grace in Jesus Christ.

The Southern Lit Alliance was instrumental in the production of the book. Executive Director Lynda LeVan said the catalyst behind the book was a small-group writing and journaling workshop conducted as part of the Turn the Page program that Alliance Lit was conducting with Love’s Arm.

â€œAndrÃ©ana was the facilitator of the workshop and after hearing the stories of some of the women in the group, she felt touched to write the book,â€ said Ms. LeVan. Ms. LeVan then applied for and received a grant that helped pay for the author, printing of the book, and a video on the book.

While the book tells the story of three survivors, the cover was also designed by a survivor.

â€œA lot of emotion went into this book, as well as a strong desire to tell truthful and hard-hitting stories with the aim of making people aware that these events are sadly all around us,â€ Ms. Nikkel said. “We need to be more observant, more vigilant to help recognize when people need help and to show love, grace and compassion.”

Songs of Deliverance is available for purchase in The Shop at Love’s Arm, which will open soon on Shopify. Profits go to Love’s Arm.