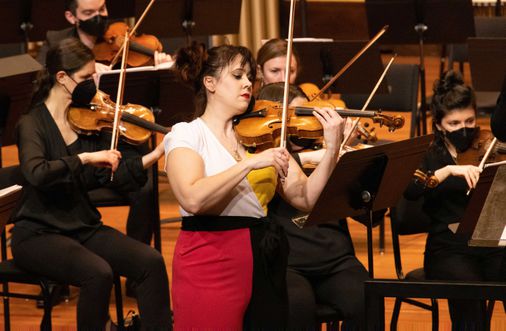 On Friday night, the Boston Modern Orchestra Project performed its most normal concert of the season – as normal as the BMOP is, anyway. Compared to February’s organ extravaganza at Symphony Hall and June’s highly anticipated production of Anthony Davis’ opera “X: The Life and Times of Malcolm X” at Dorchester’s Strand Theatre, the concert of Friday’s portraits of Ellen Taaffe Zwilich came closest to typical BMOP pre-pandemic events: The orchestra was back in its usual venue at Jordan Hall, with artistic director Gil Rose on the podium and modern music under – esteemed in honor.

Zwilich, who celebrates his 83rd birthday later this month, is honored with several accolades. She became the first woman to earn a Doctor of Musical Arts in composition at Juilliard in 1975, the first woman to receive the Pulitzer Prize for Music in 1983, and possibly the first female composer to be named in a “Peanuts” tape. drawn, after cartoonist Charles M. Schulz heard about her through the MacNeil/Lehrer NewsHour in 1990 and drew Peppermint Patty standing in her seat cheering her on at a concert.

Zwilich has consistently produced works for ensembles large and small since, but today’s generation of symphony aficionados (myself included) are more likely to know her for her place in history than her actual music. Her orchestral pieces appear semi-frequently in college and regional orchestra programs, but the Boston Symphony Orchestra, for its part, has not played anything from her this century. Enter Rose, who has worked within Jordan Hall’s current COVID-19 safety guidelines (concerts must have no intermission and must not last longer than 90 minutes) to curate an inviting four-piece lineup of recent decades.

Get the Big TaskYour guide to staying entertained, from live shows and outdoor entertainment to what’s new in museums, movies, TV, books, restaurants and more.

This concert was the 21st such event in BMOP’s long-running ConNECtion series in partnership with the New England Conservatory, and avidly listening students filled many of the seats in Jordan Hall. The composer was also present, seated near the front of the room, and Rose and the evening’s two soloists – flautist Sarah Brady and violinist Gabriela Diaz – made sure to give him due honors with every salvo of applause.

Although the pieces may have been short-lived, they did not lack style or substance. The orchestral appetizer “Upbeat! Zwilich sets an exuberant tone with its homage to Bach’s Violin Partita No. 3; BMOP’s low brass echoed the strings’ opening melodic gesture and matched them with nimble agility, creating a feeling of breathlessness that didn’t cease until the final bar. Several of the orchestra’s wind players then demanded seats to watch the next two pieces. Brady first came with the spiraling “Concerto Elegia,” which the composer wrote in memory of her husband. The strings created a hazy background in long tones for the flute to wander; they gradually evolved into a conversational partner for the soloist, with searing pizzicatos driving the flute into virtuoso flights. Yet Brady imbued them with a poignant sense of weight, with the pain of loss never entirely absent.

As a violinist herself, Zwilich has a special affinity for the instrument. His concerto for solo violin and string orchestra, “Commedia Dell’Arte”, is a masterpiece par excellence. Diaz, who is usually found seated in the concertmaster chair at BMOP concerts, took the stage in a suitably buff jumpsuit (one pant leg black, the other red, with sparkly green sandals) and s turned out to be the perfect player to present this rarely played concerto to the public. The giddy, mischievous antics of the first movement “Arlecchino” and the violent double stops of the third movement “Capitano” were divided by the sly grace of “Colombina”, all the characters meeting in the finale. Comedy troupes may be rare these days, but if ever a concerto required a ballet accompaniment, this could be the one.

A few bows and an impressive rapid passage to the black concert later, Diaz was back in his usual seat and the winds returned to the stage for Zwilich’s Symphony No. 5, subtitled “Concerto for Orchestra” and a fitting conclusion to the concerto sampler. Although the symphony passed through many moods and moods, with moments that echoed the sparkling playfulness of the ‘Commedia’ concerto and the depth of ‘Elegia’, it never seemed lost. Rose led the charge with clear direction, and the orchestra rode the roller coaster around the room with confidence.

Zwilich said hearing a wonderful rendition of one of her pieces was the “peak of success” for her, and BMOP served up four such performances. It may still be true that many listeners know more about Zwilich’s accomplishments than his music, but it’s high time that changed. Luckily, BMOP recorded the concert for release on their house label BMOP/sound; sadly, we’ll all have to wait until 2023 to hear it. Until then, go to YouTube, choose one and press play.