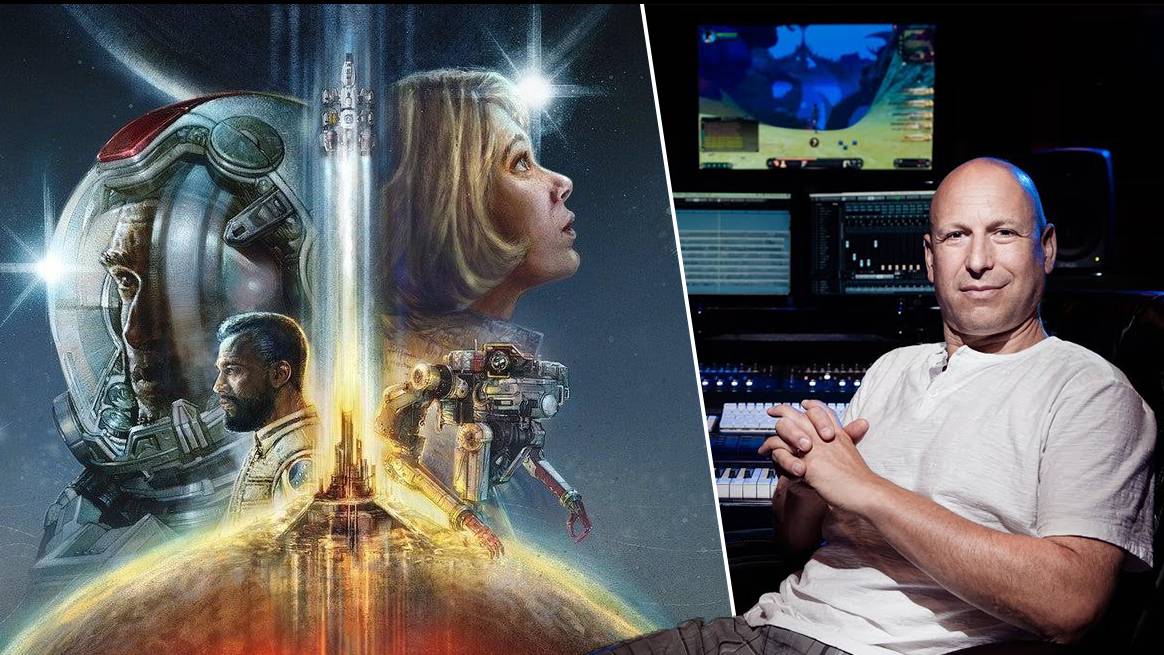 Inon Zur is one of, otherwise the most, prolific composers working in the gaming industry today. With a massive backlog of iconic sheet music to his name, chances are any gamer worth his salt has had his songs stuck in his head at one point or another.

The Israeli-American melodist is known for his work on artists like Dragon Age: Origins, Prince of Persia, Fall 3, 4 and New Vegas, Crysisthe next star field and many others. We sat down with Zur to discuss his work on the new game Syberia: the world before, which comes out on March 18 alongside the vinyl release of the soundtrack.

Before we begin, see Zur in action performing the main theme of Fallout 4.

Our conversation with Zur winds through a number of topics, including its creative process, how to really nail the tone of a video game through its music, and what the inside of a Fallout Vault looks like.

GAME Bible: Tell us about your process – how do you prepare to write a play? Are you often given carte blanche on what you want to do? Or do you have certain ideas and motives that are fed to you?

Inon Zur: Well, at the start of every project, but especially if it’s a new project, I’m always involved. I like to know as much as possible about the project first. If I can come to the studio and meet the people behind the game, watch the footage, the gameplay. If the game is in further development, I would really like to play the game. I really feel like it, before I even think about it [the music].

Then we get into the most creative meeting, which is the type of music the developers envision. So I have the three Ws, don’t I? ‘Where’, ‘what’ and ‘why’. And the “why” is actually the most important. Because I want to know: what motivates the characters in the game? What drives the plot? And I want to know how to drive the player himself.

So let me give you an example. When I worked on Fallout 4, (Head of Bethesda Game Studios) Todd Howard told me the story of the game, and it was a very intimate story about you looking for your son. So I said, how about the piano? Because the piano, for me, brings intimacy.

GB: It is interesting that you say how the piano came to be used as an expression of your son’s search. Does that feeling come often, when someone describes the game, or you play the game, and you hear the music you want to make for it?

IZ: Yes quite. Consider the “when” and the “where”, and take Syberia: The World Before, for example. We’re talking about pre-WWII, we’re talking about Europe – that already takes us to a very specific place in time. So I’m going to think of music that will bring the player into this era. One of the characters is a classical piano performer and obviously we want to feature the piano to support his character. So these things almost automatically scream for me to write them down.

GB: I was reading an interview where you said that you often want to talk to the sound designers of a game to get an idea of ​​what’s going on in a scene. The example you used was that if there is an engine running in a game scene, you will find out what key an engine is running in and write to that key. Can you explain your thought process behind this?

IZ: The best way to express music in games, I always say, is that you don’t really hear it, you feel it – it creates emotion, but you don’t really notice it. There are many techniques to do this, but one is to really consider other noises and background sounds. Now the player will be unaware, but something will feel right, or something will feel wrong and they will never really know why. But we know. So, for example, in the case of the engine purring in the key of E, if I wrote in F, which is a semitone above E, it would sound strained, weird, and uncomfortable, and I might well want create that feeling.

The problem is that it is about awareness. The music is a completely separate part of the soundtrack, as we have dialogue and sound effects, and more. If the music works with those things, it creates a wholesome experience. But if it draws too much attention to itself, it actually distracts the player from what’s going on, and that’s the last thing we want to do.

GB: So with games like Fallout and Prince of Persia, they’re based on fantasy and things that don’t necessarily exist. How do you incorporate that into the process?

IZ: That’s an excellent question. Let’s take Fallout as an example. We know that we are inside a parallel universe where, in the 1950s, the world [as we know it] just ceased to exist – but now we’re in the 2100s or whatever. A whole new reality has arisen. For that, I think the last music we knew was from the 50s, right? Now, from the 1950s, there has been a sort of diversion; an extraction of this [music], and he went to a very unknown place. Everything that was played by the violin, for example, will be improvised by a primitive instrument. Suppose all violins, including all dear Stradivariuses, cease to exist. Now we have to play, I don’t know, the kitchen sink or something that was left around here. Now, in Fallout specifically, I’ve created instruments that were born into this alternate reality. We help the player to be inside this universe by creating these sounds that are played on an instrument that literally does not exist.

GB: So what does the inside of a safe look like to you? Taking into account that you are bringing together instruments that you have created to create this ambient sound.

IZ: This is a very interesting question because the Vault is a stuffy place, but mostly the Vault is very metallic, there are a lot of metallic items there. Now here’s the trick – I can write a lot of music with metallic elements, but then what? It will merge with the real sound effects which are also metallic and it will cause confusion. Metallic sounds are usually very high pitched, so we create pads that are electronic but will have a metallic feel. They won’t have the attack or the punchy sound of the sound effects. It’ll sound a bit technological, it’ll sound a bit metallic, but it won’t be the real metal hits.

GB: So what Syberia sounds like, using this same example?

IZ: Imagine Berlin in 1937. People are walking around, and somewhere in the distance there is a lone violinist, playing and collecting coins from nice people. There’s people singing along in a church, the music that people know. I will create music that basically complements [these early 20th century sounds]. And the way to do that is to write something that will sound classic. When the player walks around Berlin, he will hear classical music, this will put him exactly where I want him to be. Of course, classical music can be happy, it can be sad and it can be scary; but again, the elements – orchestral elements, solos, classical soloists – that’s what really puts us in this world. With Syberia: The World Before, it’s so beautiful and amazing that I wouldn’t even call it a game. It’s an experience because the story is so captivating and I had to stay in a very realistic place. When I wrote [the soundtrack] I really took notes from Rachmaninoff, Debussy, Stravinsky, composers that we think these people from this milieu knew.

GB: When choosing a project, is it important to take into consideration the personal gratification you will get from it?

IZ: Of course. Since I was young, my parents listened to classical music. I was introduced to other types of music like jazz and rock and other styles much later in my life, but I’m most in touch with classical music. So, to compose the music for Syberia: The World Before was truly a dream come true. Because that led me to write classical music – that’s what I learned, that’s what I studied in Israel and here in the United States, and that’s what I like to do. I’m not saying I don’t like doing other styles. I’m very excited, for example, about the combination of electronic music and symphonic music in star field, which I can’t really talk about much. But it is also something that is very much like a discovery for me. Or Riderswhich came last year and was very, very hard and electronic – almost like a dubstep orchestra, shall we say!

GB: Do you find it hard to turn off, for example, when you go out to dinner, and you hear a pattern that you really like, do you think, ‘Oh, I wonder if I can just change the pitch or change the note slightly? .’

IZ: This happens a lot and I find myself singing on my cell phone and recording myself! Even sometimes, just by driving and thinking about stuff, I suddenly have a piece that’s with me for 24 hours, even when I’m sleeping! Today I dreamed, for example, that I was playing guitar and singing. Now I can barely play guitar and I’m definitely not a singer. But still, music is part of my life now. That said, my time in the studio is very concise. My daily routine is almost rigid, and that’s important to me. So I’ll start at eight o’clock and finish at five o’clock, and if it’s not really necessary, I won’t go back to the studio. I’m going to spend time with my family, but that doesn’t mean the music is going away.

GB: It’s surprising. Surely you have times when you are in the middle of inspiration and you have to go all the way?

IZ: I have to admit that sometimes, especially when I’m working on main themes, which are like the biggest challenge and obstacle, I spend a bit more time in the studio. But again, on a regular basis, I was really limiting myself to a maximum of nine hours in the studio and that was it. I think it’s very important for every songwriter to know when to stop – when to get out, when to do something else. Who are inspiring and also contribute to who you are.

GB: Yeah, that’s a good point, I imagine a lot of your inspiration comes from life. If you’re doing something and you’re going through something, do you kind of write your own music about what you’re doing in your head?

Syberia: The World Before will be released for Windows on March 18 with console versions coming later in the year. The digital version of the soundtrack has also already been released, and a vinyl copy will be available on March 18 alongside the game.