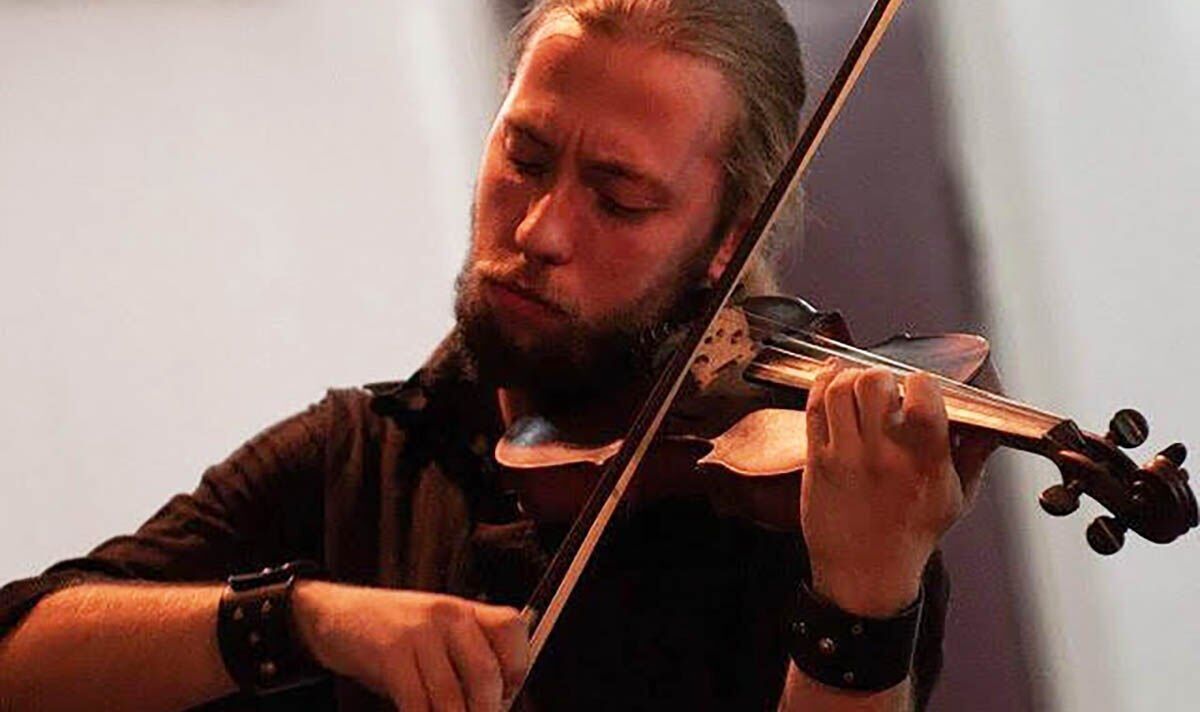 He loves fish and chips and thinks haggis is “very tasty”, but says “milk tea” is “something very strange to me”. He’s a huge fan of Irish folk music (“it’s very popular in Ukraine,” he says) and is looking forward to visiting Dublin for a dance festival, as well as trips to Stonehenge, Nottingham and Edinburgh.

The classically trained violinist has already seen the sights of London, from the Houses of Parliament to Covent Garden and “the bridge from Harry Potter”. And he’s a big fan of the BBC series Sherlock Holmes with Benedict Cumberbatch, so of course a visit to Baker Street was a must.

He describes his new home as being like something out of a “detective show, like Midsummer Murders, Mrs Marple and Inspector Linley”. Hopefully without the crime levels, we were joking.

“It’s beautiful here,” he told me. “My host family is adorable. They gave me a room, food and they really helped me here. The support of these people is something unimaginable, just thank you for Ian and Yvonne, they are really beautiful people.

“I saw so many places, Westminster, Big Ben. I planned to visit the Globe Theatre. It’s something impossible, incredible, that I live in Britain, this house, this town. It’s beautiful.”

However, none of this would have been possible without Dr. Stefania Passamonte. Stefania is Nikita’s manager at the London Performing Academy of Music (LPMAM) where he continues his studies in jazz and classical music now that he is in the UK.

Ever since war broke out, Stefania has worked tirelessly to bring young Ukrainian musicians to the UK and give them a new chance at life.

Nikita was one of the first she was able to help. The 21-year-old violinist fled Kharkiv where he was in his second year of university and went with a friend to his parents’ home in Odessa after the start of the war with Russia.

Stefania helped arrange a military exemption document for him, allowing the young musician to travel through Moldova, Hungary, Romania and then Switzerland, where he spent a month waiting for his visa and correct documents, before to finally arrive in the UK.

So far, Stefania has managed to get 10 students to safety, but her job is not done. After the start of the war, the University of Kharkiv was bombed, leaving the future of many students “in shreds”.

She was desperate to help create the Ukrainian Scholarship Fund for Refugee Students, offering support for gifted students to leave their homes and funding to travel to Britain, where they are housed and have the opportunity to study.

They have received considerable help so far, but there are still 25 more to make the trip, Stefania said.

I spoke to Nikita Vikorev on Zoom to find out how he finds life in the UK (Picture: EXPRESS)

Stefania Passamonte’s passion for trying to help these students is inspiring (Picture: EXPRESS)

“The problem is that you keep them, but where do you put them? It’s not just about getting them out, it’s also about finding them a safe place to live and then funding their education, because unfortunately that’s expensive.

“I’ve been so lucky to have the job I have, with the Board of the British Phonographic Industry (BPI). They said to write a blog and that blog was shared and retweeted by the musicians union [which is how Ian and Yvonne, Nikita’s hosts, came to being involved]they contacted me and offered to open their houses to musicians.

Under this scheme, Nikita and other musicians like him are given a vital chance, for which he is immensely grateful to Stefania – and all those who helped bring him to Britain.

But for Stefania, Nikita is her “hero”. “He did everything and even more to save the other girls, to get them out of the country, it was amazing. I went to Nikita and said help me, so he worked hard, wrote to d other people, shared my email.

“I didn’t do it myself, I did it thanks to people like Nikita. I started it but I wouldn’t have been here if I hadn’t had everyone show up.

Looking ahead, Nikita hopes the war in Ukraine will soon be over and says he is looking forward to becoming a British citizen.

But above all, he hopes to be able to see his family again. Her older sister remains in Ukraine with her husband and young son, while her parents and younger sister are safe in Gothenburg, Sweden.

They keep in touch regularly, he says, and he hopes to visit his mother and father next month. “And when I can, I want to invite them to my house for a while, as a guest, to show them London, and Berkhamsted of course because it’s a very beautiful city.”

“I really miss them,” he added.

As for his sister, he hopes that she and her family are safe and can be reunited soon. He said, “They live in a quiet town, they don’t have any bombs, and I think everything will be fine.

“We talk sometimes when we can, because she’s a photographer and she has commissions, and she has a little boy so it’s difficult. But we talk on WhatsApp or Telegram.

But for now, Nikita is filling her calendar with performances in Britain – including one at the annual meeting BerkoFest festival in Berkhamsted, which is organized by founder Charlie Hussey to coincide with this year’s Platinum Jubilee.

Although Charlie had never met Stefania before this year, he went out of his way to support her work and help Nikita settle into her new home. from taking him to local concert venues to asking him to play at the upcoming event, which will be held on June 2, he’s been a real rock for the young musician.

Charlie says he is looking forward to hearing Nikita perform at the festival, which is now in its 10th year. “To have someone so talented play for us…it’s an incredible honour.”

Royal Opera singers Phillip Brown and Kathryn Jenkin are also booked, and all money will be donated to local charities including Age UK Dacorum.

Tickets to the event – which is supported by Berkhamsted City Council – starts at £3 for students, £5 for concessions and £15 for adults, and you can find more information or book tickets at BerkoFest website.