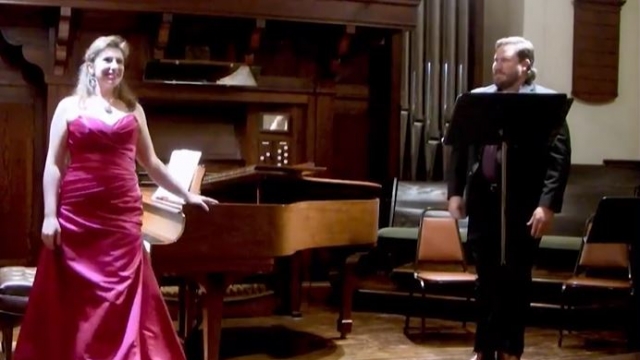 Sophia Pavlenko-Chandley said all the money raised from the benefit concerts will go to Ukraine.

“We tour all over the United States with our two pianos,” Chandley said.

They met twenty years ago when Chandley came to the United States for a musical tour.

“I came here out of love, but my heart is always with Ukraine,” Chandley said.

Chandley has been in America with a green card ever since, making her a permanent resident. Since the start of the war, Chandley says she has constantly worried about her mother, stepfather, sister and nieces, who still live in Ukraine.

Chandley says she fears not only for the safety of her family, but also for her friends at the Kyiv Orchestra.

“They had to organize concerts and tours – they had studios full of students. I mean, they’re world-class musicians and now they’re having to put it all on hold,” Chandley said.

Proof that music can unite, a now viral video shows 7-year-old Amelia from Ukraine singing “Let It Go” in an underground air-raid shelter. Since then, Amelia has also been asked to sing the Ukrainian national anthem for a relief concert in Poland.

Chandley works with opera companies across the United States and raises funds through concerts and collaborations.

“We can start playing Ukrainian music first, we can get together and do fundraising concerts. I have a symphony of music, I can donate my services as a pianist, as a composer,” Chandley said.

And while music is her passion, Chandley says it’s also a unique way to directly help her loved ones and the suffering Ukrainian people.

“I am working very hard at the moment to raise funds. And when this horrible war is over, I’ll work tirelessly to rebuild [my country]”Chandley said.

Chandley says all the money raised from the benefit concerts will go to Ukraine.

She also urges people to support Ukrainian artists by buying their music, something so simple can be a big motivator.