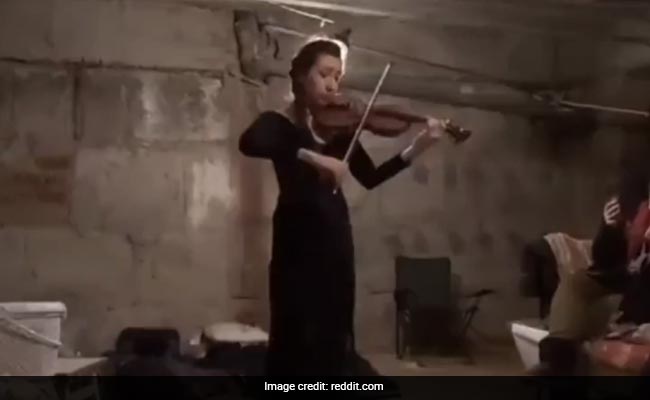 The violinist was playing a popular Ukrainian song.

Ukrainians live underground due to continuous shelling by Russian forces, which have penetrated deep into the country. Now a powerful video has emerged from the war-affected country, which shows a violinist performing in a bomb shelter amid attacks.

The video moved netizens on social networks, who claimed that the girl was playing a Ukrainian song”Nich Yaka Misyachna (what a moonlit night)”.

What we do in bomb shelters when they bomb us from the sky pic.twitter.com/SzielSRxIj

This is yet another video showing how Ukrainians overcome the fear of bombings and live their lives. A few days ago, a girl singing the Ukrainian national anthem on a flute in an air raid shelter during the bombing of Lysychansk went viral.

Social media users called the violinist’s video “hauntingly powerful” and it has been viewed 1.3 million times on Twitter.

So powerful in such a tragic setting. Putin can never destroy our talent and our art. With love from Kyiv bomb shelter 💕🇺🇦🥺

“This makes me cry,” one user posted on Twitter. Reddit user Lokican said, “This shows the endurance of the human spirit.”

Praising the efforts of the young violinist, a user from Ukraine commented, “Our talents will never be broken by anyone!”

French President Emmanuel Macron said on Monday that the situation in Ukraine was getting worse day by day and that France would continue to pressure Russia through sanctions.

“The situation is getting worse every day. People are dying, fatigue is setting in… We failed to get a ceasefire,” Macron told LCI television.

The Russian-Ukrainian war has been going on for 13 days now, and if the shelling continues, up to five million Ukrainians are expected to flee their country, a senior European Union (EU) diplomat has said.

More than a million people have so far fled to neighboring Poland and more than 50,000 have arrived in Germany.

Pope Francis criticized Russia’s operation, saying rivers of blood and tears were flowing in Ukraine. He rejected the term “military operation” which Russia has used to describe its actions and said “this is a war that leads to death, destruction and misery”.