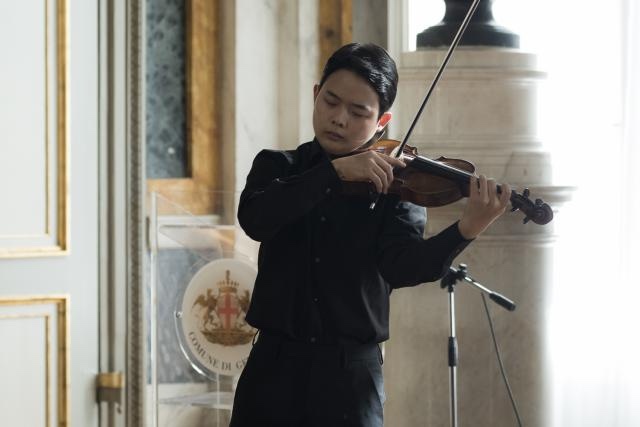 According to the Korea National University of Arts, on Wednesday Chung won second prize in the latest Paganini competition held in Genoa, Italy. He also won two other special prizes, including one for the youngest finalist and one for the best interpretation of a contemporary play in the semi-finals.

The competition, founded in 1954 and named after legendary Italian violinist and composer Niccolo Paganini (1782-1840), is a prestigious event for young violinists, along with the Queen Elisabeth International Competition held in Belgium. Violinists between the ages of 15 and 31 can participate.

This year, Giuseppe Gibboni from Italy won the first prize, while Ava Bahari from Sweden and Lara Boschklor from Germany shared the third prize.

The competition has been well regarded in South Korea since violinist Yang In-mo rose to fame after winning in 2015 at the age of 19, also winning the two special prizes that Chung won this year.

Chung has been studying with violinist Kim Nam-yoon at the Korea National Institute for the Gifted in the Arts since 2014.

He won the Il Piccolo Violin Magico in Italy in 2016 and the Euroasia Young Violin Competition 2016 in Japan.

Wunder-barn! Violinist transforms an old stable into a cozy concert hall with a Berlin chamber orchestra – The First News