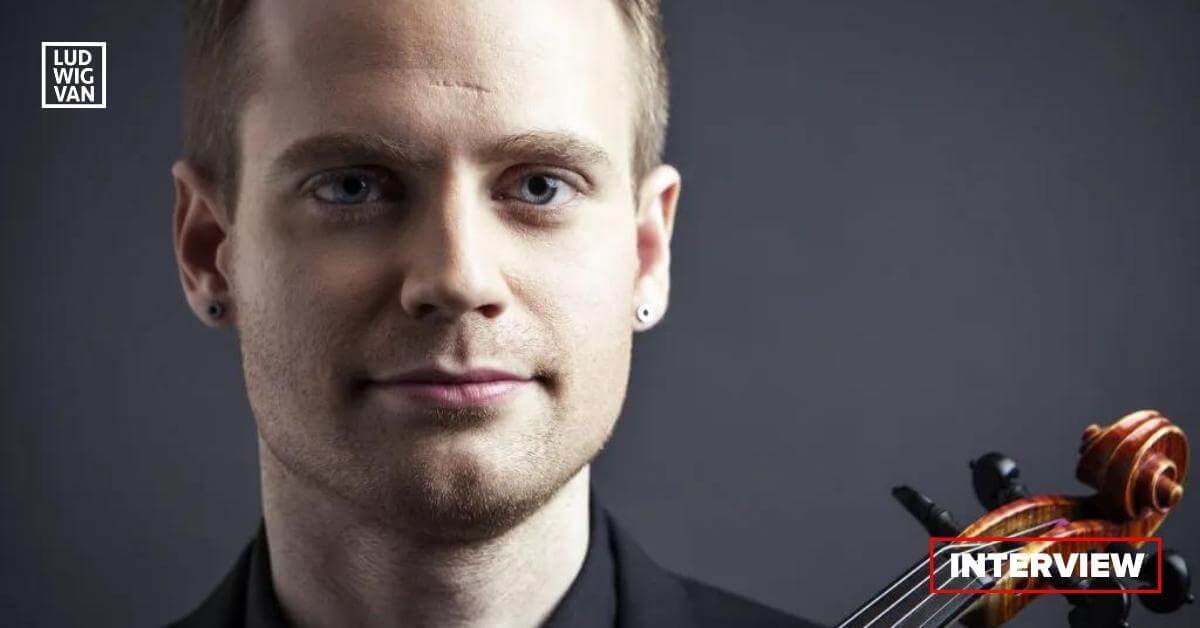 Violinist Marc Djokic talks about life, music and the premiere of a new work in Toronto on April 1

Renowned violinist Marc Djokic will return to Toronto for a concert with Sinfonia Toronto on April 1st. In addition to a piano concerto by Mozart and a string quartet by Haydn, the program will premiere a violin concerto by composer Robert Rival commissioned by Djokic.

LVT caught up with Marc as he prepares for the show.

Originally from Halifax, Nova Scotia, Marc Djokic has been concertmaster of the Orchester Classique de Montréal since 2018.

Coming from a family where his sister, parents, aunts and uncles were all musicians, Marc Djokic’s violin lessons began during his childhood with his father, the noted soloist Philippe Djokic. He made his concert debut at the age of 14.

He then studied at the Cleveland Institute of Music through their Young Artists program, then at the New England Conservatory and the Jacobs School of Music at Indiana University. Marc was named winner of the ECMA Classical Recording of the Year 2020, as well as the Mécénat Musica Prix Goyer 2017-2018 and an Opus Prize from the Conseil québécois de la musique.

Alongside his busy position at the OSM, he has performed across the country as a guest soloist and has become known for his promotion and commissioning of new works as well as for his interpretation and technique.

Robert Rival’s compositions are written in an extended tonal style, and he counts the vast Canadian landscape, as well as literature, among the main inspirations for his work. He earned a doctorate in composition from the University of Toronto and is now based in Ottawa.

His compositions for orchestra, voice and chamber ensemble have been performed by orchestras across Canada and performed internationally. He is a researcher and composer and teaches at the University of Ottawa.

Coming from a family of performing musicians, how difficult have the past two years of the pandemic been? How did you stay busy?

People often ask me, as a musician, how I coped with the pandemic. Looking back on the past two years I’ve faced, I’ve continued to play my instrument and play virtually. How? I have to thank all the music organizations, our unions and their teams who have pushed through all the closures to ensure the continuation of the performing arts during and after the pandemic. On a personal note, I became a dad during the first month of the pandemic. My wife Avery and I had a wonderful – and often loud! — distraction from the stress of the global pandemic.

You are going to create a work written for you by Robert Rival at the concert in Toronto. What can you tell us about this piece and how it was written for you?

I met Robert three summers ago at the Scotia Festival of Music. My sister, cellist Denise Djokic and pianist David Jalbert had just created her cello sonata. I had heard a lot about Robert and was really into his musical style after hearing that first performance. We talked during an after-concert party, like all musicians, and the idea of ​​a concerto came up. This idea has obviously stood the test of time!

This concerto entitled in the shade of the cypresses is in five movements and is scored for string orchestra. As with any new piece of music, there is excitement and anticipation leading up to the first rehearsal and ultimately the first performance. Even though I’ve seen the score, there’s a lot to absorb and discover in the rehearsal days leading up to the gig. What I have experienced so far in the practice studio is a concerto that pushes the technical limits of the violin, but not without intention of expression and color.

You have participated in the commissioning of several pieces as well as in the CAMMAC Composers Competition. How important is it to mix new music with old favorites from the classical repertoire?

When given the opportunity to organize a full concert program, I like to choose sometimes radically different music with contrasting or diverse themes. I think this creative chaos is important in broadening audience expectations of the broad genre of classical music. There are also many unexpected connections between new music and old favorites, which is always a treat to learn and share with audiences.

How optimistic are you about the future of classical music, given your direct experience with emerging and contemporary composers?

Looking back on the journey of this concerto, I think composers and musicians will continue to create no matter what. Maybe optimism needs to be mixed with stubborn determination, but at the heart of it comes together through the mutual admiration of music.

What are you most looking forward to from the next Sinfonia Toronto concert?

I look forward to so many things. It’s a first, it’s a concerto by Robert Rival, Toronto Sinfonia with Maestro Nurhan Arman, it’s a great concert to attend. Also, I had never been to Toronto until I was in my early twenties, so I still get that energetic excitement every time I go back. You might also spot me in a few record stores around town the day after the gig.

On April 7, I will perform in a multidisciplinary ensemble that my wife, visual artist Avery Zhao, and I founded in 2014 — Art Crush (Ensembl’arts). It will be a highly creative performance combining live painting, dance choreography and music intertwined in an art event at the Ottawa Art Gallery, presented by ONMC (Ottawa New Music Creators).

In June, I will play Max Richter’s Recomposed — The Four Seasons at the marvelous Festival Classica of Saint-Lambert, (greater Montreal).

Tickets for the April 1 concert of Sinfonia Toronto Mozart Haydn Rival can be found here.

Get daily art news straight to your inbox.

Sign up for the Ludwig van Daily — classical music and opera in five minutes or less HERE.