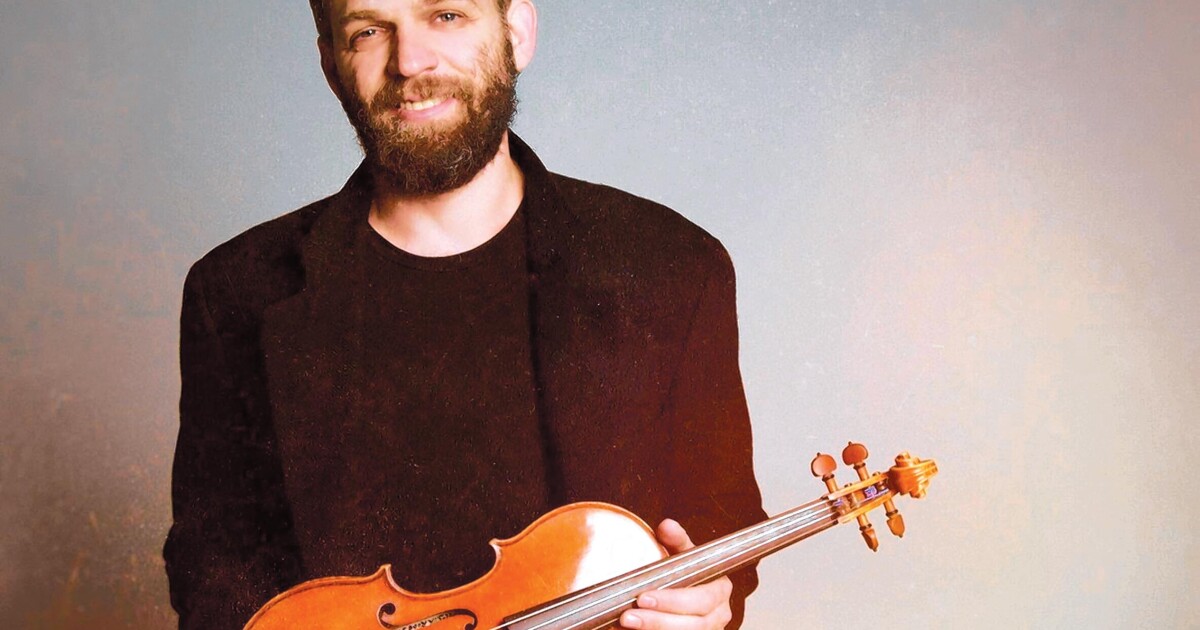 Violinist Johnny Gandelsman considers the audience an equal partner in his concerts, whether with the fearless Brooklyn Rider String Quartet, Yo-Yo Ma’s Silk Road Ensemble or a herculean solo performance.

“I spend many hours training,” Gandelsman said. “But you can only find out how the piece affects you when you perform it in front of an audience.

“It immediately changes everything about how I play, how I listen. You can spend 100% of your time learning a piece in your bedroom, and then you learn 100% more about how you’re affected by the piece when you interpret it.

Born in Moscow and raised in Russia and Israel, Gandelsman came to the United States to study at the Curtis Institute of Music in Philadelphia in 1995. He won a Grammy Award for Best World Music in 2016 for co-producing “Sing Me Home” by Silk Road Ensemble.

Gandelsman’s exquisite ‘JS Bach: Complete Cello Suites (Transrated for violin)’ was released in February 2020, a month before his original concert with Art of Elan, which had to cancel it due to the COVID-19 pandemic . Now, Art of Elan is bringing Gandelsman to San Diego to open its 15th season with “This is America” at the Institute for Contemporary Art (ICA) Central in Balboa Park and “BaCH @ The JAI | Bach Cello Suites” at JAI from the Conrad Prebys Performing Arts Center in La Jolla.

“This is America” ​​is a new recording project featuring over 20 works for solo violin, written by American and US-based artists. The project was commissioned by 20 arts organizations across the United States, including Art of Elan.

Because the COVID-19 pandemic caused his national tour to be canceled more than once, Gandelsman used the time to put together “This is America.” The concert features a wide range of contemporary composers, including many women.

With the cello suites, Gandelsman respectfully fiddles a bit with Bach. He was inspired by his friend and frequent collaborator, Irish master violinist Martin Hayes.

“Martin is an amazing violinist,” Gandelsman said. “He bows with so many beautiful joints. I like this. While working on the cello suites, I tried to see if I could approach them from a slightly more violinist position, not really baroque. I like folk music.

Because Bach indicated that a five-string cello should be used to perform the sixth suite, Gandelsman learned to play a five-string violin.

“It gave me an opportunity for growth,” he said. “It’s unusual in the world of classical music to play on a five-string. But in the violin world, it’s very common. I really enjoyed that.”

The violinist has known the husband-and-wife team of former New York cellist Alex Greenbaum and violinist Kate Hatmaker, executive director of Art of Elan, for more than a decade.

“It’s a real pleasure to have Johnny in San Diego for these two very compelling and contrasting programs,” said Art of Elan co-founder and creative director Kate Hatmaker. “’This is America’ offers such a diverse range of artists and soundscapes, from folk music to jazz to more classical pieces; it’s like a musical tapestry reflecting the current culture of our country. And seeing him play the complete Bach Cello Suites the next night is almost breathtaking. Johnny is truly one of the most versatile and thoughtful artists around and we look forward to sharing his talent with our San Diego audience.

Art of Elan, under the direction of Hatmaker, launched the BaCH (Beyond a Concert Hall) initiative in 2019. Its aim is to present Bach’s works in non-traditional spaces.

“We’re very close musically and otherwise,” Gandelsman said. In 2019, “our family came to San Diego and it was fun. It’s really nice to have friends like them. You bring them an idea: ‘I want to play cello suites, what do you think- you? It’s so encouraging when they say, ‘Yes, of course!’

Gandelsman is no new to these two-hour solo concerts. In 2018, he recorded and performed the complete Sonatas and Partitas for Violin by Bach during a tour, including a concert at the Carlsbad Music Festival.

What draws him to the musical equivalent of running marathons?

“I like the idea of ​​a deep dive into something,” Gandelsman said. “Most of my time is with Brooklyn Rider, Silk Road Ensemble and other bands. And I produce records. It all has to do with working with a lot of people and lining up multiple schedules. There’s something refreshing about being responsible only for yourself.

“I was excited to do the cello suites, but people were like, ‘Why would you do that?’ “What would the cellists say? Many people said not to. It just gave me more motivation.

“It’s been so rewarding to work on these pieces and now have this other corpus that I know inside out.”

‘This is America‘ with Johnny Gandelsman

Wood is a freelance writer.