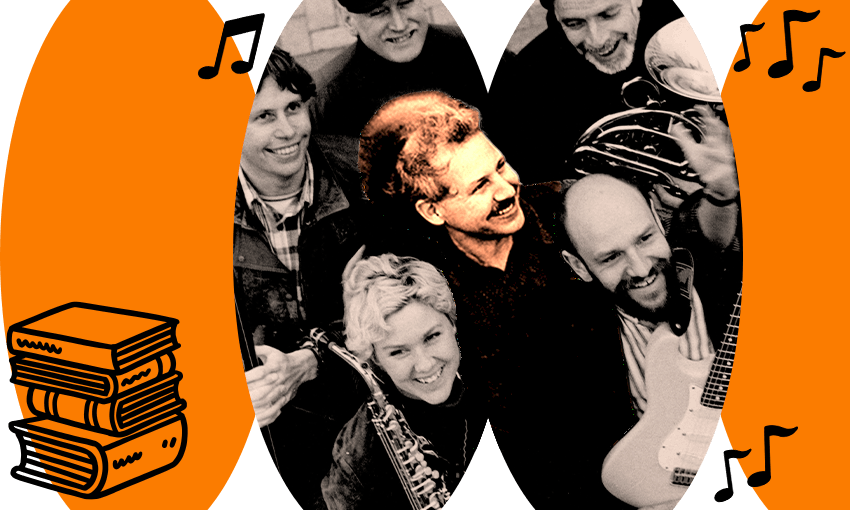 Peter Simpson reads Around the Corners, Out to the Edges, a memoir published two months after the untimely death of his friend, Jonathan Besser.

The title of Jonathan’s memoir comes from the opening lines of a long poem by American poet Robert Creeley, written during his second visit to Auckland in 1995.

Curious to come back here
where I never knew where I was,

follow the example of provident strangers,
in the corners, on the edges…

– The Dogs of Auckland

There is a multiple adequacy to this choice of title and epigraph. Jonathan, like Creeley, was an American who came to New Zealand as a foreigner and approached the country with openness and curiosity. But Creeley only visited twice for a few months in total, while Jonathan came in 1972 and (with a few breaks) stayed for 50 years, becoming a New Zealand citizen and establishing his storied career as a composer and musician in much in this country.

There is another connection between Creeley and Jonathan. The Dogs of Auckland was published in 1998 by The Holloway Press, a printing press company of the University of Auckland. I was co-director with Alan Loney; we have printed the poem with seven highly expressive ink brush drawings of dogs by NYC-based New Zealand artist Max Gimblett. In 2009 Jonathan turned Gimblett’s poem and dog drawings into an Auckland Festival multimedia event with live music composed and performed by Jonathan (and others). There was an eight-part reading of the poem, accompanied by projected visuals featuring Gimblett’s drawings – not just those published in the book but over 40 others. (You can watch a performance of the poem with music by Jonathan and visuals by Gimblett here.)

It was during the preparations for this event that I first met Jonathan; he needed copyright clearance to use the poem and drawings. Over the next decade and more we became good friends, often meeting to share a bottle of red wine at the late Golden Dawn or at our respective homes in Ponsonby and Mount Eden. Our friendship led to a new collaboration in 2011 between Jonathan, Gimblett and Holloway Press: The Green Bicycle, involving facsimiles and recorded performances of Jonathan’s gamelan-influenced music, and several unique colored ink drawings. (different in each copy) by Max plus a wonderful Indonesian-inspired poem by Chris Price which gave the book its title.

These people are mentioned in Jonathan’s memoir not in the spirit of ‘naming’ (he was modesty personified) but because creative engagement with others was central to his modus operandi. Even the music he composed in isolation (until a few weeks after his death) was often written with specific performers in mind – duets for violin and viola, string quartets, song cycles, full orchestral scores or music for the many bands he has created, from the electronic of Free Radicals to the klezmer-influenced music of The Zestnicks. This diverse story highlights some of Jonathan’s enduring characteristics – his zest, his inventiveness, his versatility, his kindness, his sociability, his responsiveness, his drive.

For almost as long as I’ve known him, Jonathan has been talking about this book, and I’m so glad he got to hold a finished copy before his untimely death. Many of his friends were writers – poets, novelists, playwrights, historians, art writers, critics – and he was determined to become a writer himself, even if, as a borderline dyslexic (as discussed in the book), writing presented him with difficulties. I searched through old emails from Jonathan, and the first mention of the book I found was: “Now I’m back on my memoir – re-read.” It was February 2015, over seven years ago, and he had obviously been working on it long before. Jonathan doesn’t say much about this lengthy process in his endnote to the book, but acknowledges four editors who worked with him on the manuscript at various stages, the latest being Nicola McCloy, named with Jonathan on the page. title, which ultimately brought the book to bed.

Despite half a century in New Zealand, Jonathan sounded when he spoke like Woody Allen and looked more and more (as he said himself) like Albert Einstein; he remained to the end a Jew of New York. In fact, living in New Zealand reinforced his sense of Jewishness. He writes, “I have no idea if I would have ended up writing similar Jewish music or if I would have identified as Jewish as much as I did if I had stayed in New York. In New York, the most populous Jewish city in the world, being Jewish was commonplace, part of the air he breathed; in New Zealand, being Jewish gave him an edge and he came to explore it more and more, as in, to give just one example, the Aroha/Ahava song cycle he wrote for Maori singer Mere Boynton: “The concept was to find and exploit the unique cultural connection between Maori and Jews using the Song of Songs from the Old Testament.

An increasingly strong influence on his work was klezmer music, defined by Wikipedia as “an instrumental musical tradition of the Ashkenazi Jews of Central and Eastern Europe.” Essential elements of the tradition include dance tunes, ritual melodies and virtuoso improvisations played for listening; these would have been played at weddings and other social functions”. Several of Jonathan’s bands, such as Bravura, The Besser Ensemble and The Zestnicks, played this style of music, oscillating between infectious liveliness and soaring melancholy and with an unusual combination of instruments. The Zestnicks, for example, used trumpet, vibraphone, violin, viola, bass, guitar, vocals and of course always with dynamic impresario Besser on keyboard.

But while remaining somewhat exotic in our native garden, Jonathan deeply identified with his adopted country. He has lived at various times all over – in Dunedin, where he was a Mozart Fellow, as well as for long periods in Wellington and Auckland; although essentially urban by instinct, he even spent time living remotely in Hokianga. He left New York in the early 1970s because he found it abrasive, dangerous and very competitive. He writes: “I love my home country, New Zealand – its human size…Here in this small country, I work with dancers, I make film music, I write for symphony orchestras and leading chamber groups, I play the piano…I do conceptual art, ad-lib with Poet Laureates and work in poor schools. I think you have to be versatile in New Zealand to make a living and get by happily.

Jonathan Besser did more than “get by happily”. New Zealand did a lot for him but he in turn gave a lot in return. As this captivating and vivid memoir – packed full of anecdotes, characters and unique bits of cultural history – demonstrates, he made an indelible contribution to our cultural fabric and his passing leaves a gaping hole.

Around the Corners, Out to the Edges: A Memoir by Composer Jonathan Besser, by Jonathan Besser with Nicola McCloy (Bateman, $50) is available from Unity Books Auckland and Wellington.