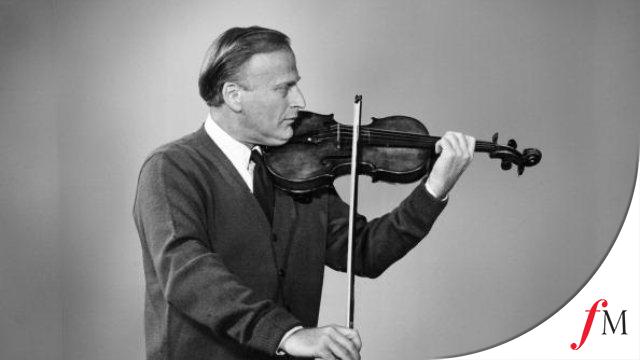 The American-born violinist and conductor was one of the greatest violinists of the 20th century. His 70-year recording contract is the longest in the history of the music industry.

His first public appearance, at the age of seven, was as a soloist with the San Francisco OS.

He studied in Paris with the Romanian composer George Enescu.

His first concerto recording – Bruch’s Violin Concerto – was made in London in 1931.

In 1932 he recorded Elgar’s Violin Concerto under the direction of the composer.

Menuhin commissioned a sonata from Bartok in 1943.

Menuhin performed for Allied soldiers during World War II and, with Benjamin Britten at the piano, for the surviving inmates of the Bergen-Belsen concentration camp.

In 1947 he performed concerts with the Berlin Phil under the direction of Wilhelm FurtwÃ¤ngler as an act of reconciliation.

In 1949, he gave the first performance of Walton’s Violin Sonata.

In 1952, Menuhin met the influential yoga teacher Iyengar and arranged for him to travel with him and teach abroad.

In 1962 he founded the Menuhin School in Surrey.

In 1965 he received an honorary title of knight.

In 1983, Menuhin founded the International Yehudi Menuhin Competition for Young Violinists. Many of its award winners have been successful, including Tasmin Little, Julia Fischer, and Ray Chen.

Menuhin’s recording contract with EMI spanned approximately 70 years and is the longest in the history of the music industry. He made his first recording at the age of 13 in November 1929, and his last in 1999, when he was almost 83 years old. He has recorded over 300 works for EMI.

The slogan â€œWho is Yehoodi? Popular in the 1930s and 1940s was inspired by Menuhin’s appearance on a radio show, where Jerry Colonna transformed “Yehoodi” into a widely accepted slang term for a mysteriously absent person.